An Engagement Out West, Part 4: The Silver Thread

This is the fourth in a series of posts about our July 2015 vacation out west. Wendy is composing these posts while I handle the photos and maps. Enjoy!

On July 17th we left peaceful Pagosa Springs and headed toward Gunnison. We crossed over Wolf Creek Pass and then turned at South Fork onto the Silver Thread, a scenic 120 mile stretch of highway 149. Scenic indeed! 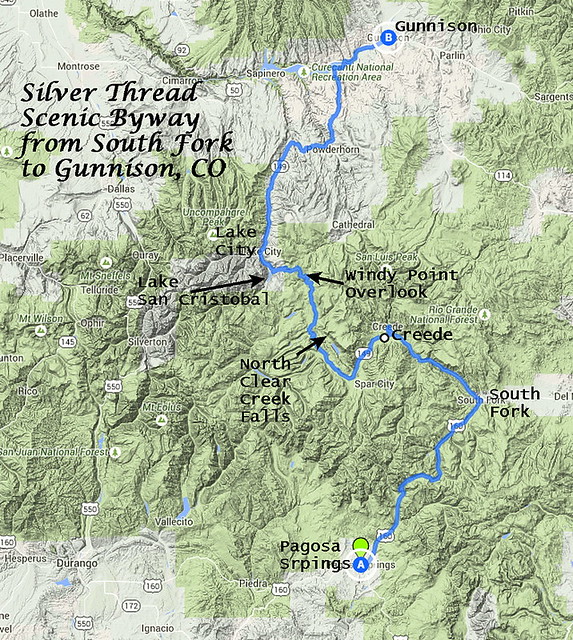 Along the way we saw clear rivers and fields blanketed in wildflowers. We cruised through Creede and stopped to stretch at a pullout where you can see the mountains which create the headwaters of the Rio Grande. Around 50 miles into the trip on the Silver Thread, we pulled over at North Clear Creek Falls for another break. No waterfall was visible from the road, but we were amazed at the power and beauty of North Clear Creek Falls, where the creek plunges a little over 100 feet, heading toward the Rio Grande. The roar of the rushing water was deafening, and I was in awe of the powerful force of the water. I cautiously made my way through the rocks to get closer to see the raging stream down below. It was quite a drop. Granger was happily climbing around on what I thought to be precarious perches, snapping photos of this monster of a waterfall. 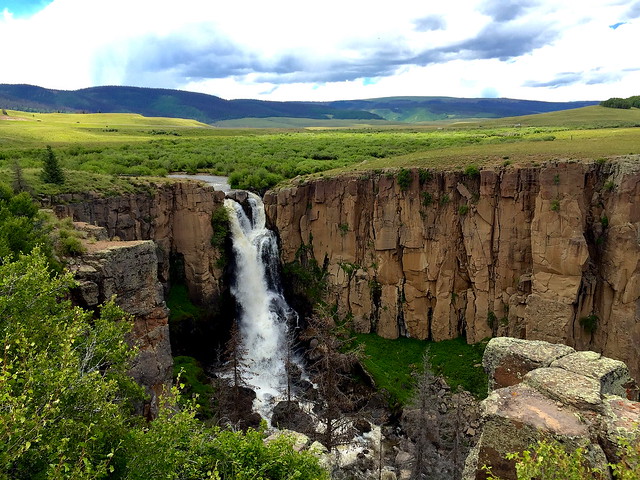 We then drove 25 miles to Lake City. On the way, we stopped at Windy Point Overlook. While gazing at the snow-topped “fourteeners” (mountains that are over 14,000 ft tall) in the distance, we listened to the quiet rustling of the aspen trees. Then Granger remarked, “You know, Al Packer ate people up here.” What a romantic!

As we continued our trip, we saw more breathtaking terrain. There were many steep climbs, sharp curves, and switchbacks. We stopped along the road high above the emerald colored Lake San Cristobal and drove through Lake City. 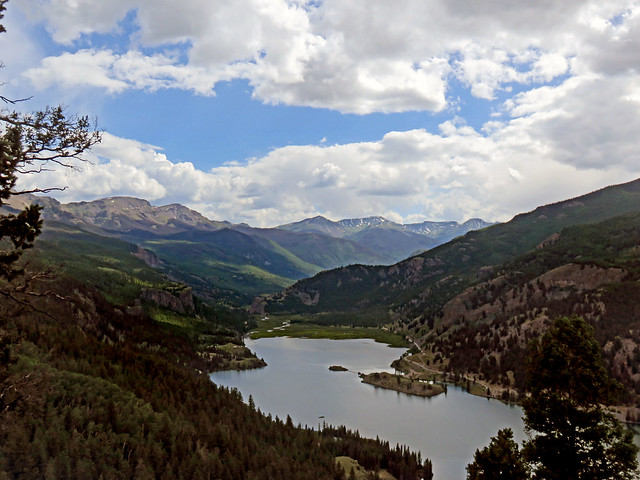 Then we drove alongside the Lake Fork of the Gunnison River to Blue Mesa Reservoir, Colorado’s largest lake. From there, we headed east toward Gunnison, from which we planned to drive over to the Black Canyon of the Gunnison the next day. 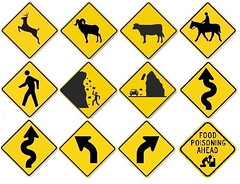 On this almost 200-mile trip, we saw many road signs that indicated animal crossings, sharp turns, and falling rocks. So along with all of the scenic beauty came danger. One of those yellow diamond signs should have predicted a gut-wrenching time in Gunnison, as Granger got a bad case of food-poisoning. We ate at Anejo’s, where Granger had really enjoyed the food on a previous trip. The food was just okay this time, and I think his beef fajitas were a little on the rare side. Granger was seriously ill for over 24 hours. I did my best to make him comfortable. He wouldn’t take any medicine for the symptoms, saying that doing so would make it worse. “I just need to let my body fight this stuff off naturally and get it out of me,” he said.

For the first time ever, he let me drive his car so I could go to town and get supplies. Since it was a rainy day, it was the perfect day for me to learn how to drive his car, since I often got the gear shifter mixed up with the windshield wiper mechanism. I stopped at Dollar General and picked up bland foods like crackers and butter cookies. I also got some Gatorade as well as some ice pops that were already frozen. This is why I like Dollar General – they’re cheap, easily accessible, and they’ve added a frozen section. Just about anything you need from Wal-Mart you can get at Dollar General, and you won’t have to walk 10 miles to get it.

Granger was delighted with the ice pops, Gatorade, and crackers. Over the course of the day, he slowly improved. When he asked for his fifth ice pop, I knew he was going to make it. The next day we eased our way eastward to the Garden of the Gods.

Click here for a slideshow from this part of our vacation

An Engagement Out West, Part 5: Ruby Mountain & Garden of the Gods >

< An Engagement Out West, Part 3: Pagosa Springs & The Cumbres and Toltec