An Engagement Out West, Part 5: Ruby Mountain & Garden of the Gods

This is the fifth in a series of posts about our July 2015 vacation out west. Wendy is composing these posts while I handle the photos and maps. Enjoy!

Granger and I have taken many trips in the past few years.  He usually does all of the planning, researching the various stops along the way. It’s just the information hound in him. He likes to read…a lot. So when he was down for the count with food poisoning in Gunnison, I decided to take a cue from him and do some researching of my own.

During this down time, I read about the towns we would pass through once we eventually got on the road again.  Eager gold and silver prospectors founded many of the towns. The railroad promptly joined those places, and when no big lodes were found, everybody moved on, leaving virtual ghost towns.

Two places that caught my interest were Mount Antero and Ruby Mountain. I enjoy digging around for rocks, so those two places seemed promising. Mount Antero is known for aquamarine crystal digging, while the mis-named Ruby Mountain is known for its garnets and Apache tears. My dad had a nice collection of the Apache tears as well as other rocks he gleaned from a trip to Colorado back in the 1970s. 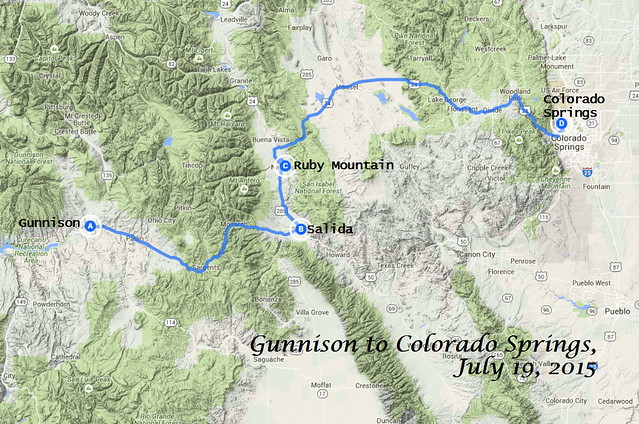 The next leg of our trip

On the morning of July 19th, Granger and I left gut-wrenching Gunnison and started our 170-mile trek to Garden of the Gods Resort in Colorado Springs. Our destination would be a welcome relief from Granger’s trials in Gunnison. Along the trip we saw many flower covered fields and valleys. They reminded me of those pictures of the Swiss Alps surrounded by a rainbow of flowers.

The winding highway was bordered with patches of yellow, red, purple, white, and coral flowers, which completely blanketed the undulating landscape for as far as the eye could see. When we got back home a few days later, I was inspired to attempt painting this wonderful scene, as I could not successfully capture it using the camera. The painting is still a work in progress.

At one point in the trip, I spied a clump of deep pink wildflowers that I’d never seen before. Granger stopped alongside the road 3 times before I found these flowers again.  I walked out into the high grass and harvested a sprig of these neat looking pinkies. When I took a whiff, they smelled like a combination of gasoline and skunk spray, so I left them there. Looks really can be deceiving! Since then, I’ve spent hours online trying to find the name of those stinkers, but so far, no luck. 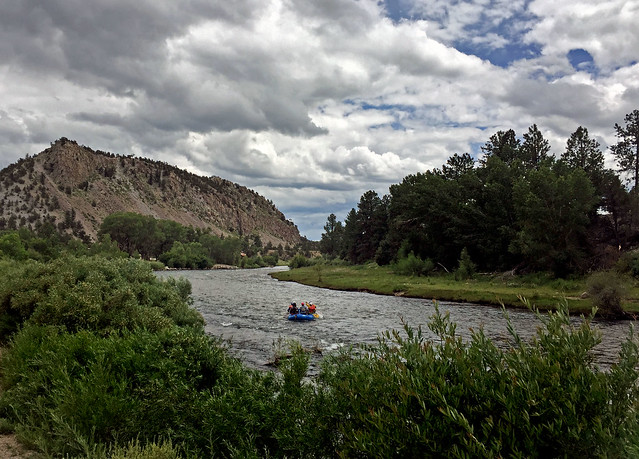 Eventually we got to Ruby Mountain alongside the Arkansas River. Granger still did not feel too well, but we watched rafters fly down the raging Arkansas River. Due to recent heavy rains, the river was filled to the brim. One of the rafters saw me and called, “Hi Mom!” This part of the Arkansas, near its mountain origin, is quite different from the wide bank of sand we see downstream in Tulsa. 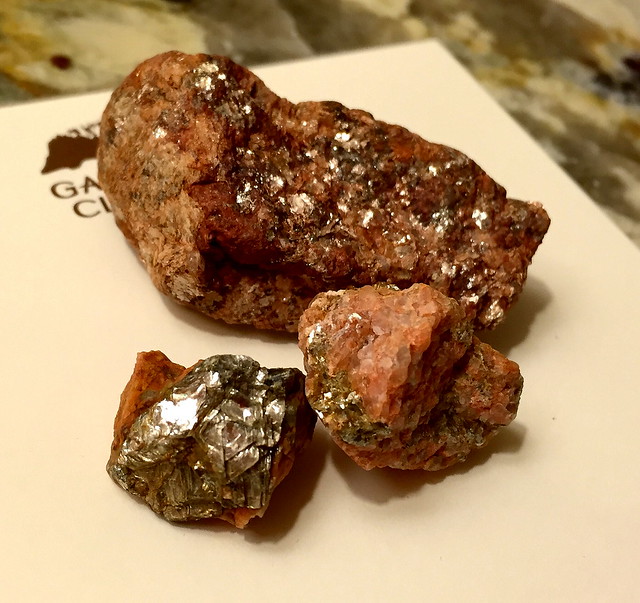 After exploring the riverside, we pulled over at a nearby dry creekbed that ran around the base of a hillside, and I went rock hunting. Some of the most unusual rocks I found were coated in what looked like silver. It was probably mica, but it brought back a fond memory from my childhood.

I was around 5 years old, living in Arlington, Texas. My dad found me in the yard digging a big hole. He asked what I was hoping to find, and I told him I was digging for gold. He redirected me to another part of the yard and showed me how to gently scrape and brush away the top layer of soil using a whisk broom. As I brushed away the dirt, a big hunk of silver was exposed. Looking back, it seems like it was magnetite. I think he planted it there, but at the time I was entirely amazed!

Dad passed away at the beginning of school this year. I’m glad to have good memories like us digging for gold. As funerals tend to do, his brought the family together, allowing me to reconnect with siblings and other family members that I have not seen in years.  It’s a good thing, but all of the events related to the reconnection and all of the events related to the start of school have made it hard for me to remember the details of the summer trip.

Granger has been extremely busy since school began, but I asked for his impressions of this leg of the trip.  Thank goodness, or I wouldn’t know what to write at this point except: Yay! Breakfast in bed at Garden of the Gods Resort!

GARDEN OF THE GODS: SLIDESHOW | MOSAIC 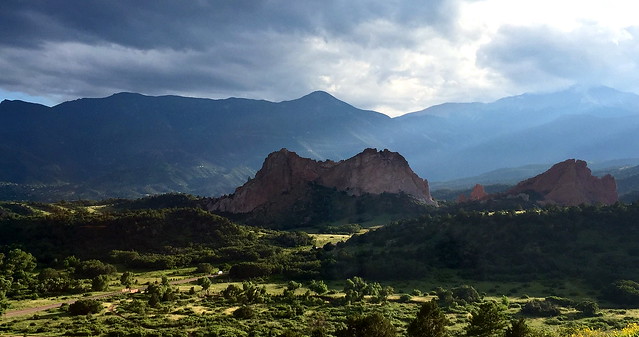 The view from our room (click photo for slideshow)

When we finally arrived at Colorado Springs, we were amazed by our spacious, well furnished room with a gorgeous view of the huge red rocks of Garden of The Gods. The resort was immaculately landscaped and well tended by the many rabbits that hopped around the grounds nibbling the vegetation.

That night we had a romantic dinner out on the patio of the on site restaurant with a view of Pike’s Peak as well as the Garden itself. The next day, we had breakfast delivered to our room. I had some scrumptious pancakes with all kinds of berries on top.  Fancy schmancy! I don’t like berries, so I scraped them off. Granger had his regular fare of scrambled eggs and bacon.

Our Hike at the Garden of the Gods

After filling up on a hearty breakfast, we hiked the Garden of the Gods. Granger chose to avoid the asphalt trails that were crowded with people and, instead, opted for the red dirt horse trails. The trails weren’t great due to the heat and the horses (along with their litter). Granger was glad he’d gotten a map, as the trails were numerous. We got a two-mile hike out of it anyway. And of course, I collected a few interesting rocks and snapped photos of the flowers there. 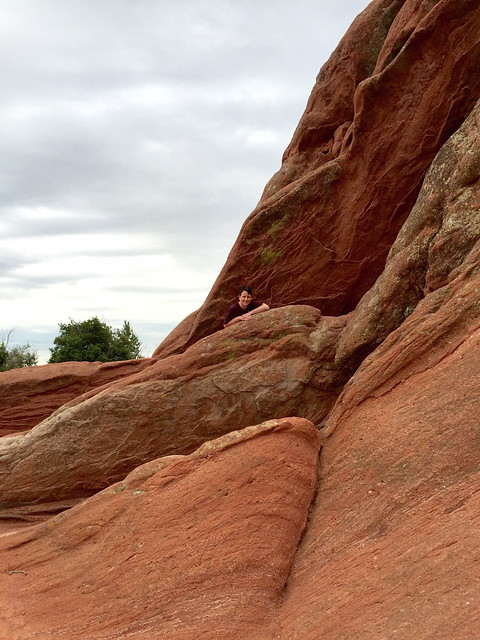 Wendy at the Garden of the Gods

Later we drove up to Manitou Springs, which Granger called “Eureka Springs on steroids.” He was interested in an intimidating, long, steep trail up the mountainside. It didn’t interest me! We got out and about too late to visit Maramont Castle; that will have to wait for a future trip.

The next day we would kick rocks* and travel to Monument Rocks in Kansas.

< An Engagement Out West, Part 4: The Silver Thread

I enjoy day hikes, photography, podcasts, reading, web design, and technology. My wife Wendy and I work in the Bartlesville Public Schools in northeast Oklahoma, but this blog is outside the scope of our employment.
View all posts by Granger Meador →
This entry was posted in day hike, photos, travel, Wendy. Bookmark the permalink.