This is the sixth and final post about our July 2015 vacation out west. Wendy composed these posts while I handled the photos and maps. Enjoy!

Flat farmland and feed lots. That’s all Kansas has to offer. Or is it? Granger was determined to find something else in western Kansas for the final leg of our engagement out west, zigzagging our way along the northern route from Colorado Springs back home to Bartlesville. 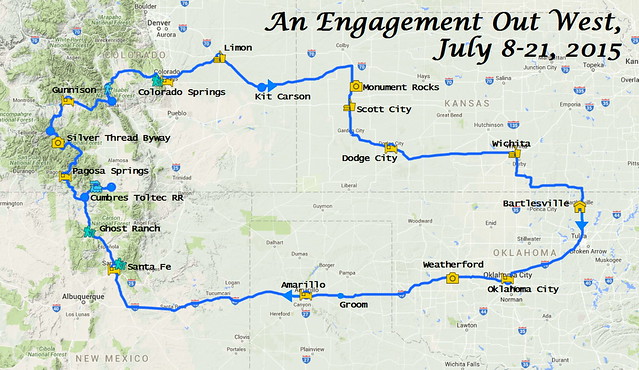 Driving east from the beautiful Garden of the Gods, we zipped through Colorado Springs and quickly found ourselves in the doldrums of a drive across the flat plains of eastern Colorado. We angled up to Limon for lunch, but then Granger decided to forgo Interstate 70 in search of something more interesting along a route through the town of Kit Carson. The town proved to be far less interesting than its namesake. 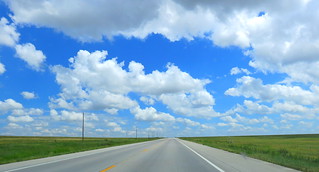 After experiencing the dramatic mountains and mesas of southern Colorado and northeastern New Mexico, it was a snooze fest to drive for centuries through field after flat field of wheat. This sedated expanse is a patchwork quilt of yellow and green accented occasionally by a sad looking silo. Every now and then, Granger and I saw a pasture full of cows. Once we even saw a big pasture completely deserted save for one lonely cow. Granger exclaimed, “Cow, what are you doing out here alone? Don’t you realize you’re a herd animal?!”

Finally we entered the sunflower state. Eventually Granger turned off on a gravel road and drove for miles, with us scanning the horizon to glimpse Monument Rocks rising out of the flat landscape. It was a surreal experience. One moment we were driving down a gravel road listening to Quincy Jones. The next moment we were suddenly surrounded by cows and a large colony of 50 to 70-foot-tall chalky rock stacks. The sedimentary rock chalk was formed 80 million years ago when the land was covered in a vast inland sea. The Smoky Hill River eroded most of the rock, separating it from the nearby bluff.

This is the same type of “rock chalk” that inspired the school chant of the Jayhawks of the University of Kansas. Granger’s father is a KU grad who certainly knows the chant, which has an interesting history:

The Rock Chalk Chant is perhaps the most distinctive cheer in all of college sports. Some have likened it to a Gregorian chant, but anyone who has been in Allen Fieldhouse and heard the chant start low, then build and roll over the crowd knows that it is much, much more.

The “Rock Chalk” chant dates to 1866, when it was adopted by the University Science Club. A chemistry professor, E.H.S. Bailey and some of his associates were returning to Lawrence from Wichita on a train. As the story goes, they passed the time by trying to create a rousing cheer. The sound of the train’s wheels on the rails suggested a rhythm and a cadence to them. At first, the cheer was “Rah, Rah, Jayhawk, KU” repeated three times.

Even though KU didn’t have a football team until four years later, KU students quickly took up the chant. Later, an English professor suggested “Rock Chalk,” in place of “Rah, Rah” because it rhymed with Jayhawk and because it was symbolic of the limestone, also known as chalk rock, surrounding Mount Oread, the site of the Lawrence Campus. It became the official cheer of the University in 1897.

Teddy Roosevelt pronounced the Rock Chalk Chant the greatest college chant he’d ever heard. It was used by Kansas troops fighting in the Philippines in 1899, the Boxer Rebellion in China, and World War II. At the Olympic games in 1920, the King of Belgium asked for a typical American college yell. The assembled athletes agreed on KU’s Rock Chalk and rendered it for His Majesty.

The words to the chant are simple. “Rock Chalk, Jayhawk, KU” repeated five times. The chant is special not because of the words, but because of the tone in which it is chanted and the distinctive cadence in which each verse is delivered. The only way to really appreciate the chant is to sit in Allen Fieldhouse before a Missouri game…

The chant can be intimidating at sporting events. It is reminiscent of a Gregorian Chant, and indeed, it felt like we were walking into a cathedral when we first gazed up at the gigantic structures at Monument Rocks, which are locally known as the Chalk Pyramids. The owner of the property kindly allows visitors, but if you visit, please be aware of where you walk, since this is a cow pasture.

It really is a cow pasture

It was interesting to see the monoliths up close, as they are packed with small fossils. The locals have said that after a rain, the place smells like the ocean. Archaeologists have exhumed a multitude of sea creature fossils from the area.  Most of those are now housed in area museums. We didn’t have time to visit the many fossil museums, but we plan to go at some point. There is the Fick Fossil and History Museum in Oakley as well as the Keystone Gallery north of Scott City, which has a website with a historical timeline for the area. The Sternberg Museum has an extensive collection of fossils of sea life and dinosaurs from Monument Rocks and other parts of Kansas. The most notable exhibit is the Fish Within a Fish fossil. It would be nice to visit these museums on a return trip to Monument Rocks.

Granger shot a lot of spectacular photos of the rocks. My favorite is the one of the “Keyhole Arch,” which I found out was created by someone who used the thin wall of rock for target practice. 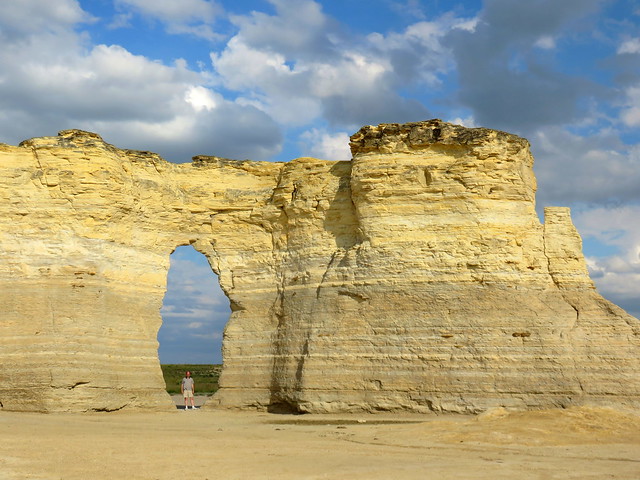 Eventually, erosion will cause the remaining rock to come tumbling down. I was a bit perturbed to see some cracks in the towering rocks. Even though the Smoky Hill River that originally eroded the rocks has shifted course, the rain and wind will continue to erode the structures. We are lucky to have experienced them.

As evening fell, we drove toward Scott City, listening to the beautiful voice of Israel Kamakawiwo’ole. He was from Hawaii, which is about as different as it gets from the wheat fields of Kansas, but his talent complemented the beautiful skies. We stopped at chef Tate Roberts’ restaurant in Scott City and then spent the night in Dodge City, glad to arrive home the next day after two weeks on the road. Our engagement out west was over, but happily, our life together was only beginning. 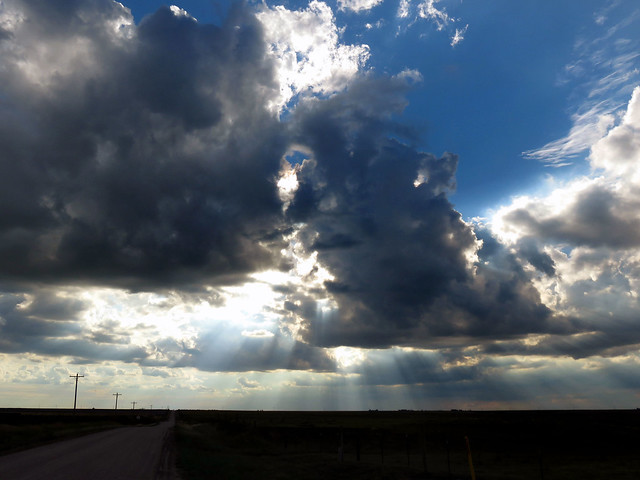 End of the engagement out west

Click here for slideshow from this portion of the trip

< An Engagement Out West, Part 5: Ruby Mountain & Garden of the Gods