An Ancient Forest & A Lost City 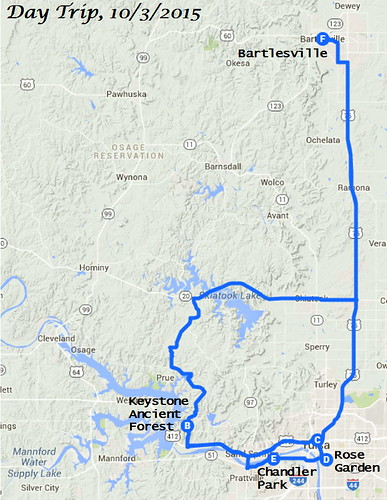 You can walk through an ancient forest and visit a lost city…both just west of downtown Tulsa. Three weeks ago I had recovered sufficiently from my respiratory ailment, and the weather had cooled enough to lure Wendy and me back out onto the trails. I wanted to show her something she had not seen before and explore some trails new to me as well. I checked online and noted that the Keystone Ancient Forest trails west of Sand Springs would be open. So I decided we would make a day trip to Tulsa for a few hikes and late lunch. I happily realized I could actually find some novel trails, despite my 250 day hikes since mid-2009, by driving west to Chandler Park, high above the southern bank of the Arkansas River, to enjoy some short trails on the bluffs there above Avery Drive.

Back in 2007 the Nature Conservancy helped open the Keystone Ancient Forest Preserve in Sand Springs, a few miles northwest of Tulsa. This 1,360 acre plot overlooking Lake Keystone has never been forested nor farmed, so some of its trees date back hundreds of years, including a red cedar more than 500 years old and a post oak over 400 years old. Unlike the ancient redwoods of California, these old trees never grow very large, given the poor soil conditions of the Cross Timbers. That ancient post oak, for example, is only 20 feet tall, about 5% of the height of the tallest redwood.

I wanted to take a more scenic route to the preserve, so we turned off US 75 onto Highway 20 at Skiatook and followed it across Skiatook Lake. Then we turned south to follow county roads across southern Osage County, passing through fields before winding our way through slopes dotted with trees and stripper oil wells. New Prue Road by Lake Keystone featured a growing number of homes on large tracts, and then we reached the ancient forest. 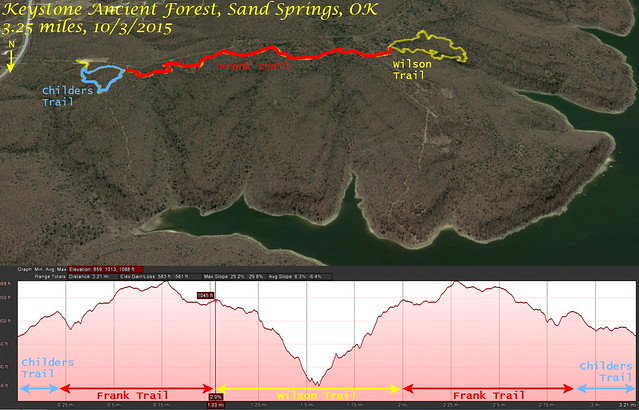 Three trails in the ancient forest 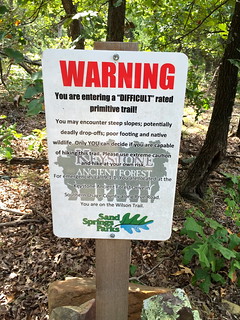 You have been warned

The uselessness of this rugged terrain for typical development is what preserved it for so long, and I’m glad the Nature Conservancy was successful in saving it for the public’s enjoyment. Be aware that you always need to check online to see which Saturdays it is open for hiking, and it is best to arrive in the morning so you have plenty of time to explore before it typically closes at 2 p.m.

I first visited the preserve with John and Betty Henderson back in February 2013. It was interesting to note the differences between a walk here in late winter vs. early fall. In 2013, the Hendersons and I had walked along part of the paved Childers Trail and then taken the entirety of the Frank Trail over to a lake overlook and back. This time, Wendy and I followed the same path until, about a mile into the hike, we reached the newly constructed Wilson Trail. That is a loop which is rated ‘difficult’ since it makes a rather rugged descent of almost 200 feet down a hillside carved by a stream. The trail runs below some bluffs before climbing back up alongside the stream bed to the Frank Trail. 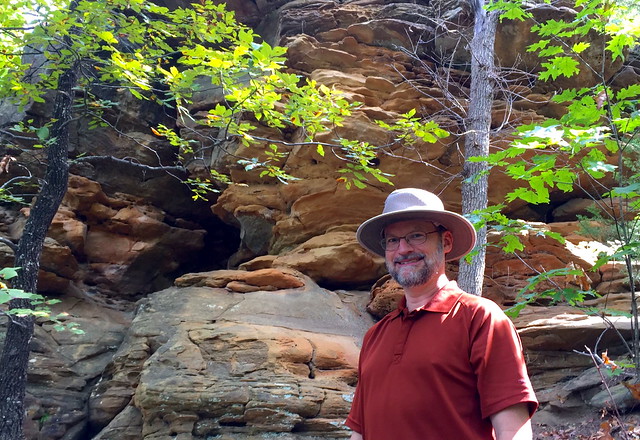 Along the Wilson Trail

You’ll note the paucity of shots from this hike. Well, the truth is that I have managed to lose not one, but two different Canon PowerShot cameras in recent weeks. Back in June, I bought a new Canon PowerShot SX700 HS to take on our July vacation. Sometime in September I misplaced it, perhaps permanently. I still had my older Canon Powershot SX260 HS, and it was still limping along despite falling off a cliff at Robbers Cave back in 2012. Well, on this day trip I managed to leave that spare camera in the restroom at the Tulsa Garden Center, and it was not recovered. It wasn’t in great shape, so that’s not too disturbing, but I do wish I had its shots from this day trip.

So the only photos we have from the first half of October are what Wendy and I shot with our respective iPhones. The iPhone 6 takes great photos, but lacks the 30x optical zoom of the latest Canon superzooms. So, before a visit to Roman Nose over Fall Break, I gave up and ordered another Powershot SX700 HS. I opted for that older model over the newer SX710 HS, even paying a price premium for the older model, because a review said the new camera lagged its predecessor in picture quality. We’ll see if I can manage to hang onto it!

By the time we finished our hike, it was warm and we were both hungry. So we took highway 412 east to the Spaghetti Warehouse, a favorite of mine in downtown Tulsa. After enjoying some pasta and delicious sourdough bread, we needed another walk, but we were not ready for another hike just yet. So we drove over to the Tulsa Municipal Rose Garden at Woodward Park. Wendy loves roses, and gleefully examined everything on offer, snapping photos of various blooms. She is excited about transplanting her own climbing rose to my house this fall, and we’re planning on constructing some raised flower beds next year for the roses she’ll be growing after we are married next summer.

After we toured the rose garden and took a restroom break at the Garden Center, we drove over to Chandler Park in west Tulsa. Situated just west of the refineries along the Arkansas River, this high bluff above the Arkansas was once called “Lost City” because of its rugged cliffs. Perhaps early settlers thought cliff dwellers once lived there, or the cliff formations resembled a city as viewed from the river below. There have also been persistent rumors through the years that outlaw Jesse James once buried money, wrapped in a leather cloth, among the rocks. I doubt there is any money to be found here, but it is rich in outdoor recreation.

100 acres of this terrain is now Chandler Park. It was donated to Tulsa County in the late 1950s by Claude Chandler, president of Chandler Materials Company. Below the park run three routes: old Avery Drive from Tulsa to Sand Springs, the Burlington Northern Santa Fe railroad, and the Arkansas River itself. Avery Drive is a nice route dating back to 1914, when Cyrus Avery, who was an influential road planner and father to famous Route 66, built what was then called the South River Road along the west bank of the Arkansas River using convict labor from the prison at McAlester, Oklahoma.

My former colleague and dear friend Carrie Fleharty introduced me to both Avery Drive and Chandler Park back when she was living west of Tulsa in Prattville, and the Hendersons once took me to the Scottish Games at the park back before those were relocated to River West Festival Park. But I’d never walked the trails along the bluffs on the park’s northern edge. There are two small signs along the road announcing the “Lost City Trail” and “Rock Room Trail“, and the cliffs down there are popular with rock climbers, while cross-country runners like to zoom along the corridors between the large slabs of rock. 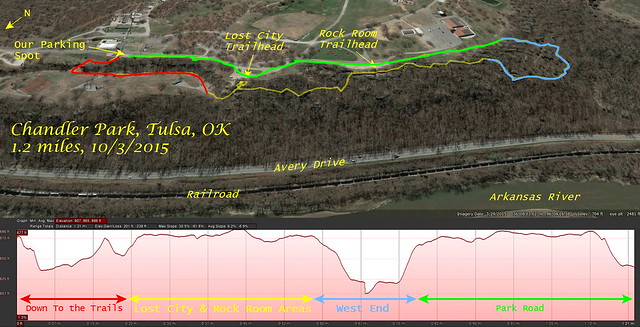 I didn’t remember where the trailheads were located, so we just parked at the eastern edge of the bluff area above Avery Drive. Just as we were about to take a stairway down to a lower area of the park, I realized I had left my camera back at the Garden Center. A call confirmed they were closed, and Wendy left them a message asking them to call me if they found my camera, but we never heard back from them. So we knew we would be relying on our iPhones to document this hike.

The road for the lower section of the park was closed, presumably to reduce usage and maintenance. Parks around here are always underfunded, and Tulsa County has gone through multiple rounds of closing park pools and the like. We located the eastern terminus of the trails and headed into the Lost City.

Soon we found ourselves zig-zagging through corridors of stone which were reminiscent of the Table Mound Trail at Elk City up in Kansas. A maze of rough trails gave us high and low options as we made our way west along the bluff. I had feared the trail would be marred, and there was some graffiti but thankfully little trash. The layered rock was interesting, although only the uppermost trails were wide and accommodating. There were few flowers, but some fungi. 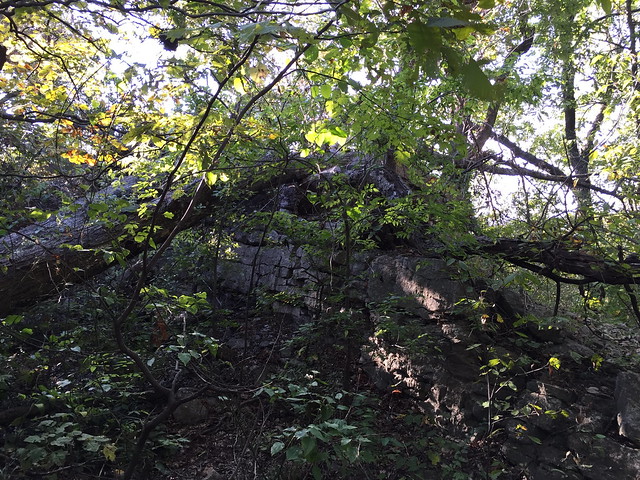 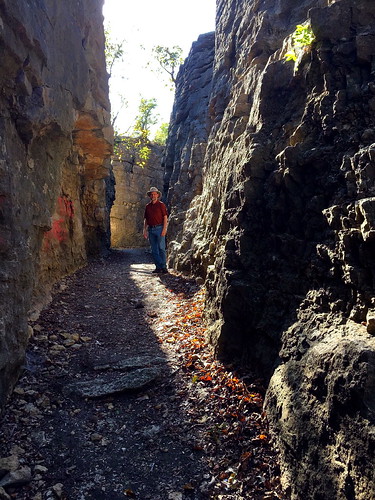 Tree-covered slabs did somewhat resemble the ruins of lost buildings, and farther west we reached the rock room, a long stretch of broken bluff that formed a corridor of stone. So both trail names were apropos. Along the way we saw a few groups of rock climbers with their ropes and climbing shoes and other paraphernalia. At the lonely western end of the bluff I took us down a steep loop which wound around to the western terminus behind the park’s 16,000 square foot community center.

We were tired and hot from threading our way along cramped trails and took the park road back east to our car. But we plan to return to Chandler Park in late October to further explore this trail system. It is always fun to explore novel trails, and those are increasingly hard to come by close to home.

2 Responses to An Ancient Forest & A Lost City