Consoling Ourselves at Lendonwood Gardens

A week after we explored the Keystone Ancient Forest & Chandler Park, Wendy and I scouted the shores of Lake Spavinaw and Lake Eucha, and we enjoyed a lovely walk in Grove’s Lendenwood Gardens. That walk was a nice consolation prize for our failed quest to hike some trails near Grand Lake.

I’ve long been disappointed and puzzled by the lack of hiking trails around Grand Lake O’ the Cherokees, the large serpentine lake built in northeast Oklahoma during the Great Depression for hydroelectric power. The Grand River Dam Authority administers Grand Lake and its cousin, Hudson Lake. (The latter should not to be confused with the tiny Hudson Lake northeast of Bartlesville.) They are the only two large Oklahoma lakes where one can build directly on the waterfront. That plus the relatively stable lake level equals extensive development along the lakeshore. Lake of the Ozarks in Missouri is even more extreme, with an endless succession of boathouses and docks along its perimeter.

When I was a teenager, my folks had a small boat on Table Rock Lake in southwest Missouri. But I happily abandoned boat ownership in my 20s. While I enjoy the occasional boat ride, the pastimes of boating and fishing that so many love at Grand Lake have little appeal to me. But I do love hiking trails. So I’ve scoured the internet for trails around Grand Lake, but the state parks along its shores have little to offer. The only trail the Oklahoma Water Resources Board’s map of Grand Lake calls out is the paved one at the Bernice area, which I’ve walked and don’t wish to revisit. I’ve confirmed there are no trails at Twin Bridges, while Honey Creek and Disney seem to be similarly bereft of designated trails.

So I turned my attention to two other nearby lakes, both built by and for Tulsa: Lake Spavinaw and Lake Eucha. Tulsa dammed Spavinaw Creek back in 1922 and built a 50-mile gravity pipeline to what is now Mohawk Park near the north edge of the city. 30 years later, it added Lake Eucha along the same creek to enhance its water supply. There once were state parks at both lakes, but the one at Eucha was taken over by the city of Tulsa back in 2011. Both parks mentioned hiking in their online descriptions, and the Audubon Society said there was a North Shore Nature Trail at Eucha. That was good enough for me, so Wendy and I set out to see both lakes, with me planning a return to Lendenwood Gardens in Grove if we could not find suitable trails at the two lakes. 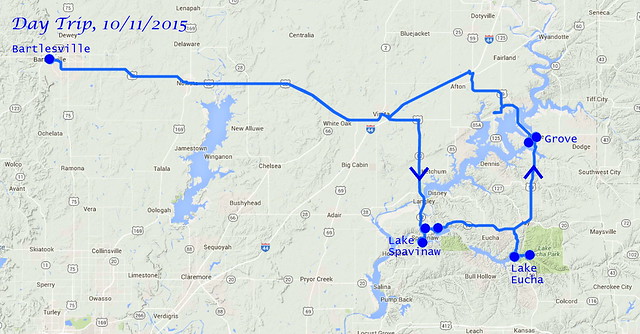 We drove east out of Bartlesville for an hour along the mostly shoulderless two lane highway US 60 to Vinita. That’s a drive I often make to reach the northern Ozarks, but I cannot say I enjoy it. We made our typical pit stop at the Woodshed in Vinita and then, instead of heading northeast on I-44 (the Will Rogers Turnpike), for once we continued east on 60 (aka 66 aka 69) for four miles to then turn south for over 16 miles down Oklahoma 82 to Spavinaw.

Little Spavinaw, like many small towns in Oklahoma, is shrinking. It was the birthplace of baseball great Mickey Mantle. He was born in the new town, which had to shift when Tulsa dammed the creek and created the lake. Wendy was fascinated by the odd surroundings. Its proximity to a lake brings in a trickle of business, but nearby Grand Lake is too dominant for Spavinaw to thrive. 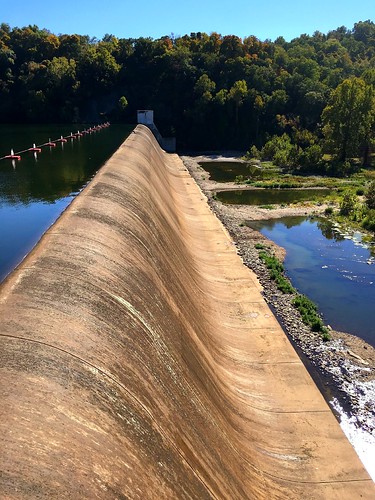 We drove through the south campground of the tiny state park, which hugs the creek below the long, low dam. Then we stopped at the dam itself, walking up to the crest where some motorcyclists were enjoying the view across the lake. We walked over to the control house, noting the 1923 dedication plaque. Wendy got a shot of a dragonfly, while I shot views of the spillway and the dam outlet. Each of us posed atop the dam, not tempted to walk down to the neglected fishing dock.

I honestly had not researched the park as much as I should have, so I failed to realize that there is a Red Fox Nature Trail on the north side of the dam at the end of Lake Street. I later found the sign for it in Google Street View, and there is a hiking icon for it at Beaty Cove on one online map, but there is little else online to describe it. Someday we will venture back and try to walk it. But this time we gave up too soon and headed east to Lake Eucha, since my online researches had assured me there was an obscure nature trail on the north side of the small park there. 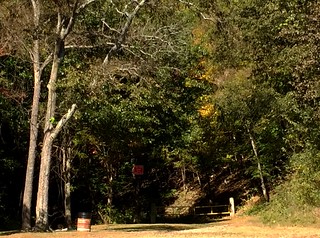 The state park at Eucha was closed in 2011 as part of our state’s ongoing series of budget cuts. The city of Tulsa took it over. We drove into the small campground west of Highway 10 on the north shore of the lake and actually found the trailhead. But then we were chagrined to see the trail was marked closed for hunting season. Drat! I’m not sure when it will re-open, but someday I suppose we shall try again.

We followed a road eastward along the lake’s north shore, noting various gravel road turnoffs leading south toward the lake. I finally took one which turned out to lead to the junction of Spavinaw Creek and Beaty Creek. A family was parked there, with small children playing in the creek. We didn’t want to disturb their fun, so we wheeled about and headed back to take Highway 10 north through Jay to Grove. It was time to implement my backup plan to go for a walk at Lendenwood Gardens.

Located in Grove along the road to the odd but entertaining Har-Ber Village Museum area, Lendonwood Gardens was once the home of retired dentist and rhododendron aficionado Leonard Miller. He established the gardens in 1995, and they expanded in 2001 when the remainder of his property there was added to the Gardens in 2001 after he and his wife moved to some land she owned on the Elk River about twelve miles away. They established Elk Ridge Garden at their new home, which is open for group tours by appointment. Lendonwood Gardens, however, is open to the public year-round during daylight hours and is free of charge, although a donation box asks for your help as you walk in. The Gardens are quite beautiful, with a blend of Asian and American gardening cultures.

I first visited Lendonwood Gardens back in 2009 and have returned a couple of times since, including a visit in April 2013. Wendy and I didn’t expect too much from the Gardens in early fall, but they were quite lovely. We enjoyed snapping shots of one bloom after another, including ones that were quite unfamiliar to us. 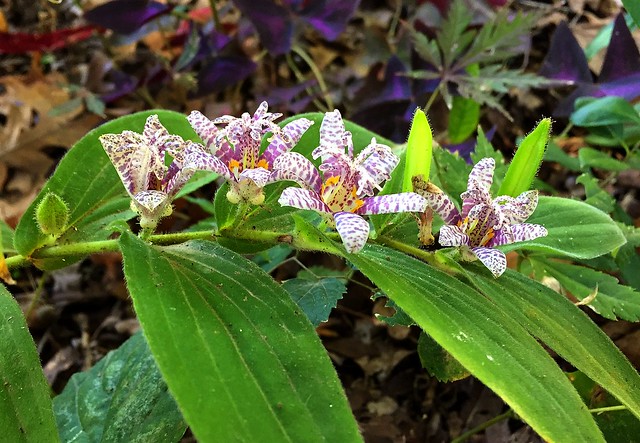 The afternoon sun was great for shots of the wide variety of leaves on offer, along with berries and more blooms. There was a nicely carved tree trunk and shaded walkways, but Wendy found a skull lying on a table in the Japanese Pavilion, a stark contrast to the sun-streaked trees surrounding the island of the adjacent Koi Pond. 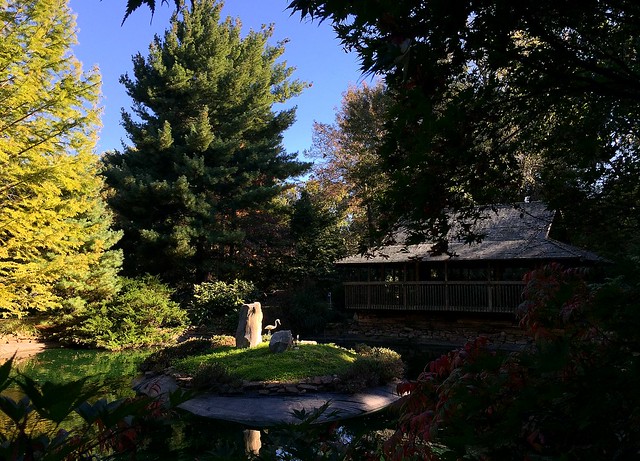 More leaves and flowers beckoned as we strolled along the shaded paths. I fear that I am not fond of the Angel of Hope in the separate western area of the garden, but I do love these Gardens and appreciate the hard work that goes into maintaining them. I am always happy to donate when I visit. 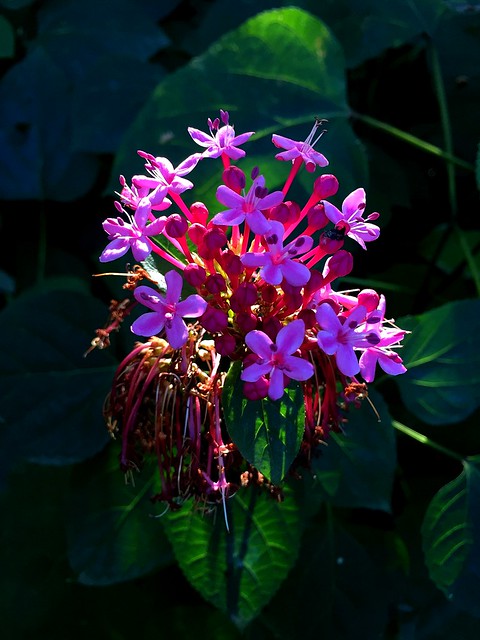 After our walk, we were ready to eat. TripAdvisor led us to La Casita de Martin in downtown Grove for some Mexican food, including some spicy salsa. Then we tried to head back home through Bernice, but a bridge was out, and that diverted us north back up to I-44 for the dash down to Vinita and then the long road west along 60 back home.

The Bridge to Nowhere

Speaking of bridges, there is an oddity in Grand Lake near here…the Lost Bridge or Bridge to Nowhere. Several bridge spans sit out in the middle of the Horse Creek arm of the lake just north of where Fly Creek comes in from the west. They don’t connect to either shore, which must seem rather peculiar to new boaters on the lake, although there is an explanation for this oddity.

Lendonwood Gardens was a lovely consolation prize for this outing, and Wendy and I looked forward to hiking the following week over Fall Break.