I Say Yes to Pink Martini! 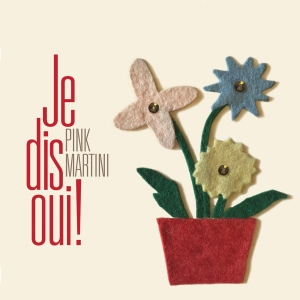 The band Pink Martini has released what I regard as its best album in years: Je dis oui! The title is French for I say yes! and is the multicultural mélange one expects from these outstanding performers from Portland. Their ninth studio album features 15 songs, many of them original, in French, Farsi, Armenian, Portuguese, Arabic, Turkish, Xhosa, and English. The album was so good I made my own online guide to it with background on each song and translations into English.

I’ve loved this group since I discovered them in 2007, hearing their standout cover of Amado mio when it played over the end credits of Carlos Cuarón’s short You Owe Me (Me La Debes). The group’s songs were so wonderful I did something quite uncharacteristic, buying a ticket to their show in Fort Worth and driving down over a weekend to hear them. I was blown away by Thomas Lauderdale, China Forbes, and the rest of the group, staying after the show to have each band member sign my souvenir T-shirt. Since then I’ve attended their shows whenever they performed in Tulsa, Oklahoma City, or Fort Worth. 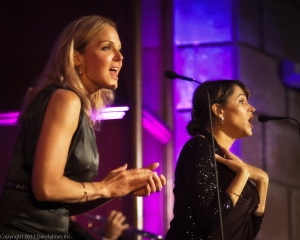 This latest album is particularly strong, with much less of the kitsch and treacle that has snuck onto their recent albums. Fans of the group know that band co-founder China Forbes lost her voice in 2011, with Storm Large joining the group as China’s vocal cords recovered from surgery. The group’s 2013 album Get Happy featured China on only four of its sixteen tracks, and she was absent from 2014’s Dream A Little Dream collaboration with the von Trapp great-grandchildren. China’s rest paid off with a full recovery, and she and Storm now trade off headlining the live shows. I’m delighted to find that China sang lead vocals on almost half of the songs on this latest album, with Storm joining China on one song and performing solo on two more.

Two songs feature NPR’s Ari Shapiro, who has appeared on previous albums, including one of my wife’s favorite tracks from the Get Happy album, Yo Te Quiero Siempre (I Will Always Love You). Two classics from the 1930s oldies feature guest artists: Rufus Wainwright does a standout cover of Rodgers and Hart’s Blue Moon, while Portland, Oregon civil rights activist Kathleen Saadat really sells Cole Porter’s Love for Sale. When I heard that fashion designer Ikram Goldman was making her singing and recording debut, I worried it would be a cameo I’d want to skip after an initial listen, but she holds her own.

My online guide to the album

Albums struggle in these days of streaming music services, which sadly don’t deliver much remuneration to musicians. This album is worth a close listen, although if you want to understand the lyrics you would likely be thwarted by an album with only three songs in English. So I went on a mission to get lyrics and translations, happily finding great liner notes and other online resources which I used to create my own online guide to the album.

Standout tracks for me after listening to the album for the first time:

If you have a streaming service, call up the entire album for a listen. And if you’re like me, go and buy the album, because these tracks are worth owning outright.

I enjoy day hikes, photography, podcasts, reading, web design, and technology. My wife Wendy and I work in the Bartlesville Public Schools in northeast Oklahoma, but this blog is outside the scope of our employment.
View all posts by Granger Meador →
This entry was posted in music. Bookmark the permalink.