On our last full day in Astoria we had lunch at T. Paul’s Urban Cafe, having been impressed by the Supper Club the night before. Our sandwiches were fine, which is better than it might sound, as I don’t often choose to eat sandwiches at restaurants. Since I effectively get less than 30 minutes for lunch on a workday, I usually just fix a boring turkey sandwich that won’t have me gaining weight. That habit leaves me unwilling to pay for most restaurant sandwiches, although on occasion Wendy talks me into enjoying a superior turkey sandwich at Subway. 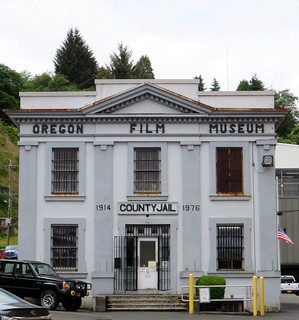 Wendy and I enjoy touring old mansions, so we headed toward the Flavel House Museum. Along the way, we passed by the old city jail. It is a now a film museum and was featured in The Goonies, a 1985 Spielberg film. I’ve never seen that flick, which reportedly also featured the Flavel House Museum and other Astoria landmarks. Quite a few other movies have reportedly been shot in this little town: Short Circuit, The Black Stallion, Kindergarten Cop, Free Willy, Free Willy 2: The Adventure Home, Teenage Mutant Ninja Turtles III, Benji the Hunted, The Ring Two, Into the Wild, The Guardian and Cthulhu. Of all of those, I’ve only seen Short Circuit and wish I hadn’t. 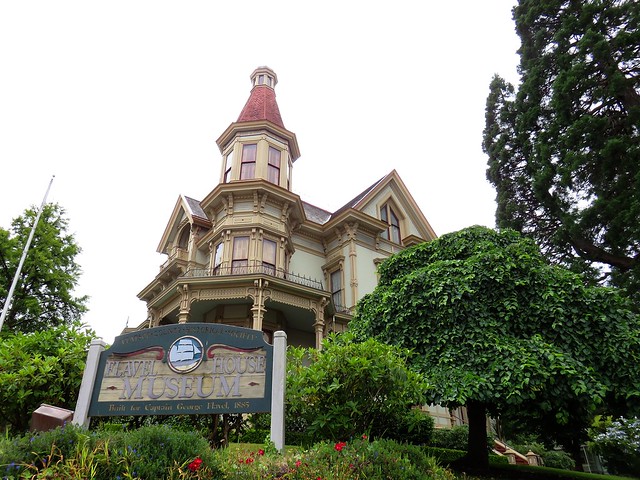 The Flavel House is a Queen Anne mansion built around 1885 as a retirement home for Captain George Flavel, a river bar pilot and real estate investor. The Columbia Bar is the shallow passage where a local pilot is taken aboard to deal with the treacherous tides, currents, and winds at the meeting of the Columbia River and the Pacific Ocean. The Columbia has no delta, instead spraying “like a fire hose” into the ocean. This area has claimed about 2,000 large vessels since 1792. These days about 16 bar pilots guide ships, often boarding vessels by helicopter. They are well compensated, earning about $180,000 per year. 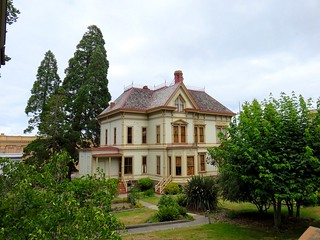 Captain Flavel earned his money in similar fashion, sans helicopter, back in the 1800s. He and his wife, Mary Christina Boelling, lived in their retirement home with their two grown daughters, Nellie and Katie. The four of them had plenty of room in the 11,600 square foot home, which featured beautiful interior woodwork that was Eastlake-influenced in design. The Douglas Fir doors and windows were wood grained by a master craftsman to look like mahogany and burl rosewood. The wood likely came from a mill in Portland or San Francisco and was shipped to Astoria by steamer.

The home has 14-foot high ceilings on the first floor and 12-foot high ones on the bedroom level. So even though it had central heating, quite a luxury for the late 1800s, it also has a half dozen fireplaces. They had indoor plumbing, which was also quite unusual for that time and place.

The Captain’s son, George Conrad Flavel, never lived in the home since he was already married when it was built. Also a river pilot, the younger Flavel built for himself another grand home which is now being fixed up after years of abandonment. There is an interesting history on why the house sat empty for so long. I’ve also found online video of that old neglected home. It needed a lot of cleanup, as its last occupants of the Flavel clan were hoarders.

We enjoyed our self-guided tour of the original mansion; I found an online video of a guided tour you can indulge in if you like. We admired the interesting and beautiful plants outside. 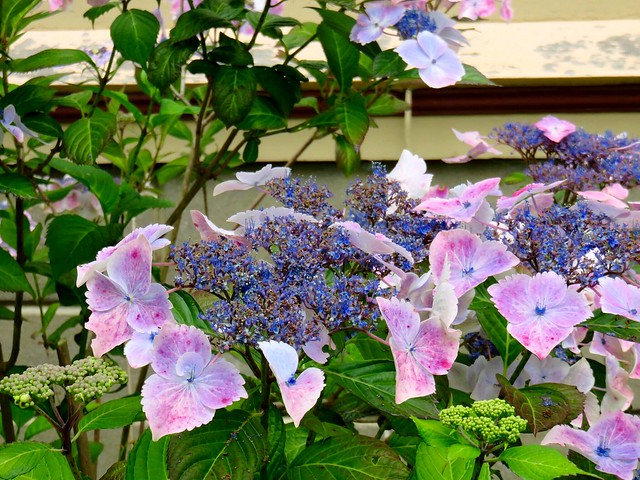 After that we made our way to an art store downtown, where Wendy purchased some alcohol inks. Then we headed to the riverfront to visit the Columbia River Maritime Museum.

I’d visited the museum a decade earlier, and it hasn’t changed much, which is fine. The Columbia Lightship and the S.S. Legacy riverboat of Seattle were at the dock as well as a Coast Guard Cutter, the USCGC Steadfast.

The Coast Guard has long protected lives and policed the waterways of the treacherous Columbia Bar. The roadway side  of the museum features a display of a Coast Guard ship in heavy seas, demonstrating the violence of the ocean. That makes it all the more impressive how the guard’s standard rescue craft for 80 years was a relatively small 36-foot motor lifeboat. In all of that time, only one of those was lost in the line of duty. In January 1961 most of the crew of the Triumph perished in a severe storm in an operation that rescued the crew of the fishing vessel Mermaid on Peacock Spit. 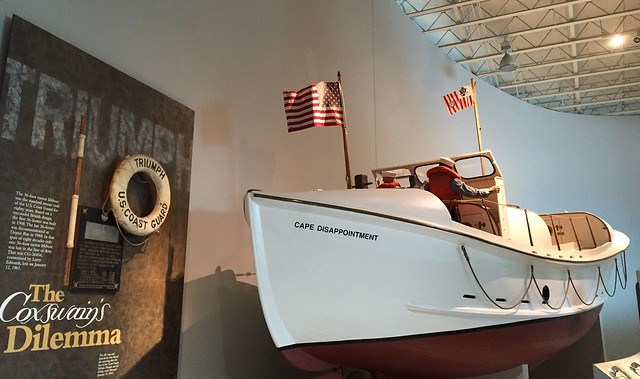 The Cape Disappointment lifeboat on display was named after a headland on the north side of the Columbia Bar. The nomenclature harkens back to the suffering of this area’s explorers.

I didn’t return to the Astoria Column during this visit, but from the riverfront I could use my superzoom camera to find folks out on its viewing platform. Whenever we return I look forward to taking Wendy to see its restored grandeur, and I hope we get to see a show in the Liberty Theatre, having admired its exterior façade.

Our last night in Astoria had us walking over for breakfast for dinner at the Pig ‘n Pancake near the hotel. We had enjoyed our stay in this maritime world, but it was time to cross the Columbia and climb our way to the windy crater of Mount St. Helens. 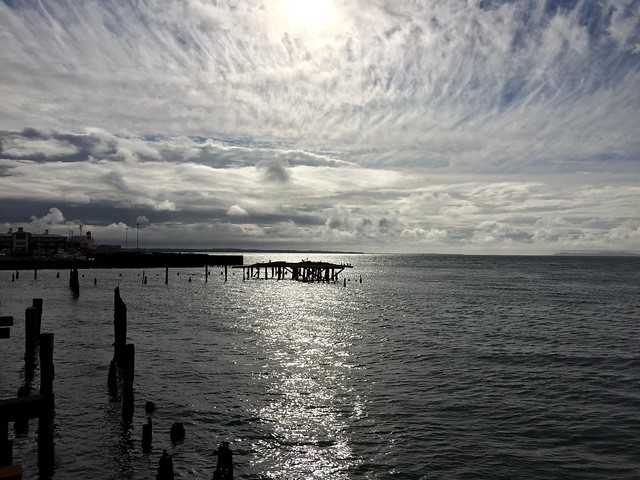