When planning our honeymoon, I’d hoped to take Wendy up onto Mount Rainier for some hiking in the snow in July. Hence we stayed in Packwood, Washington to the south of the volcano, hoping to swing around southeast of Rainier National Park and visit its prime locations on our way to our next hotel, the Kalaloch Lodge on the Olympic Peninsula.

But the Paradise area of Rainier I like to visit averages 126 inches of rain each year, compared to Bartlesville’s average of 43 inches. So I knew that our itinerary, with only one open day to visit Rainier, was at risk of being rained out. Sure enough, it was cool and rainy when we awoke, and the Paradise area was forecast for rain all day. So it was time for Plan B: we’d visit Tacoma’s Museum of Glass to break up a 4.5 hour 240 mile drive to our next lodge, which was situated along the middle of the western shore of the Olympic Peninsula. 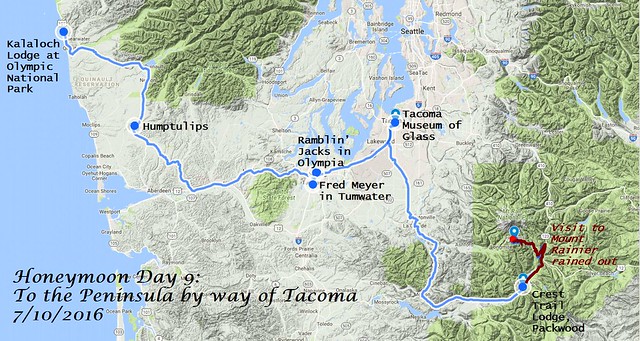 Small low clouds hugged the treetops as we drove west from Packwood to Morton and then north to Tacoma. We had to circle the Museum of Glass to search out a parking spot, landing on Pacific Avenue near the University of Washington, Tacoma. From there we used the marvelous Chihuly Bridge of Glass to walk across to the museum. That 500-foot-long pedestrian bridge has a 50-by-20-foot glass ceiling topped by 2,364 pieces from Dale Chihuly’s Seaform and Persian series. 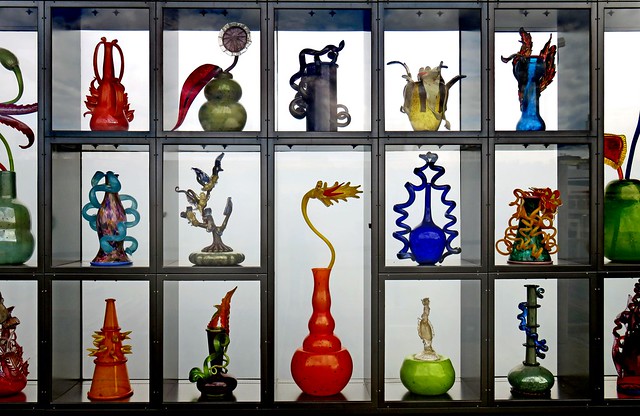 My favorite part of the bridge is the Venetian Wall, eighty feet of glass boxes housing 109 sculptures from Chihuly’s Venetians, Ikebana, and Putti series. Wendy and I each composed our own shots of parts of the display. I actually made a little money off that wall some years back, when an angled shot of the wall I took in 2005 was purchased for use as the cover photo for a CD of Vivaldi cello sonatas. 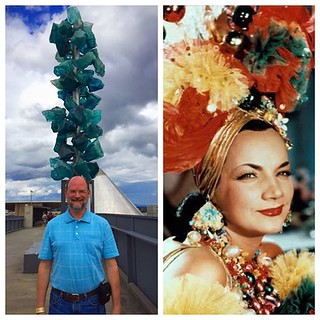 Carmen Miranda has nothing on me

Wendy had fun with the Crystal Towers, which rise 40 feet above the bridge and bear huge Polyvitro crystals. She had me pose in front of one tower to give me the appearance of wearing an immense Carmen Miranda-style hat, adorned with glass instead of fruit.

Just west of the Museum of Glass, straddled by a railroad and the Thea Foss Waterway, is Thea’s Landing. Wendy and I admired that apartment block, which offers scenic living along the waterway, both named after the lady who founded the largest tugboat company in the western U.S. She was the inspiration for the Tugboat Annie character in a 1933 film and a 1957 Canadian television series. After thriving in the early 1900s, by 1980 this waterway on one edge of the Port of Tacoma had become a vacant industrial zone and part of the Commencement Bay Superfund site. It was cleaned up by 2006 and has been thoroughly redeveloped, now featuring the Museum of Glass and picturesque Foss Harbor Marina.

Below us a flag display included a rainbow flag, reminding us that we were in the liberal coastal area of the Pacific Northwest. We entered the museum by climbing the steps around the metal cone which exhausts heat from the hot shop, where artists create new glass pieces.

During our visit Benjamin Cobb was forming a red head. It was repeatedly returned to the furnace, with him sometimes heating it with a blowtorch, to soften the glass so he could push and tug it to form the facial features. 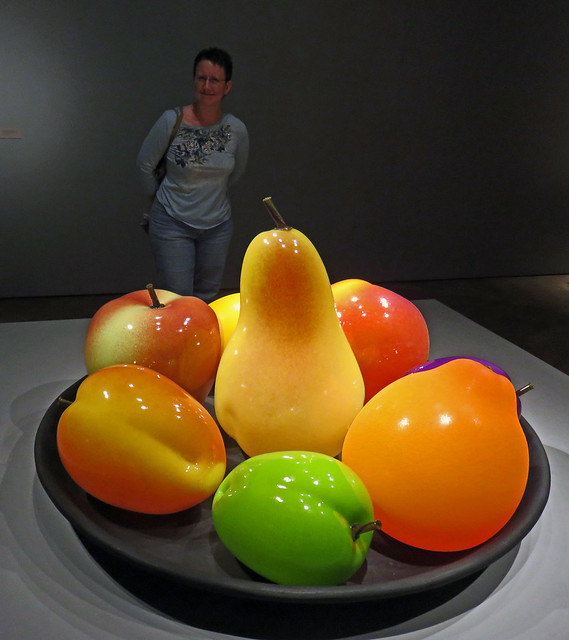 Museum pieces that caught our attention included Killer Whale by Preston Singletary, Silver Side by Raven Skyriver, the immense Still Life with Two Plums and creative Making Before Meaning by Joey Kirkpatrick, Flaming Electric Guitar by Jasen Johnsen, and Canadiana Amulet Basket by Laura Donefer. Triad by David Huchthausen had three spheres which created interesting distortions, and Let It Swirl by Martin Demaine and his son Erik, was impressive in the round.

We exited the museum around 4:30 p.m. and drove an hour west to the state capital of Olympia, where we found a delicious dinner downtown at Ramblin’ Jacks, one of the best meals on our honeymoon. Wendy’s chicken fried chicken was fluffy, crunchy, and juicy, with mashed potatoes as good as a mother could make. My French Dip was also juicy and delicious.

After a pit stop at a Fred Meyer in Tumwater, we headed west on highway 8 to Montesano, where we headed northwest on the scenic Wynoochee Valley, Wishkah, Hoquaim Roads to intersect coastal highway 101 for the drive north to Kalaloch Lodge. We made another pit stop at the tiny grocery in Humptulips, and I just had to know the etymology of that peculiar name. Humptulips is a word from the Salish native Americans and means “hard to pole” (no, I’m not kidding) because of the difficulty in poling canoes along the nearby eponymous river.

We were grateful to arrive at Kalaloch Lodge that night, although even its largest and nicest room had some shortcomings. More on that in the next post, but thankfully a visit the next day to Ruby Beach would more than compensate.

I enjoy day hikes, photography, podcasts, reading, web design, and technology. My wife Wendy and I work in the Bartlesville Public Schools in northeast Oklahoma, but this blog is outside the scope of our employment.
View all posts by Granger Meador →
This entry was posted in art, photos, travel, video. Bookmark the permalink.