We spent two nights at the Kalaloch Lodge on the shore of the Pacific Ocean in Olympic National Park. I’d been out on the Olympic Peninsula of Washington State before, but only to visit Hurricane Ridge and take the ferry across the Strait of Juan de Fuca from Port Angeles to Victoria, British Columbia. This time I opted for us to drive over to the Pacific shore because our friend and colleague Gary Layman had recommended that we visit Ruby Beach.

In planning the honeymoon trip, I had been looking for fancy accommodations and hit upon Kalaloch Lodge. I booked its largest room, the Kalaloch Room, which was originally a bar and is now a very spacious room with a panoramic view of Kalaloch Creek winding its way to join with the Pacific. 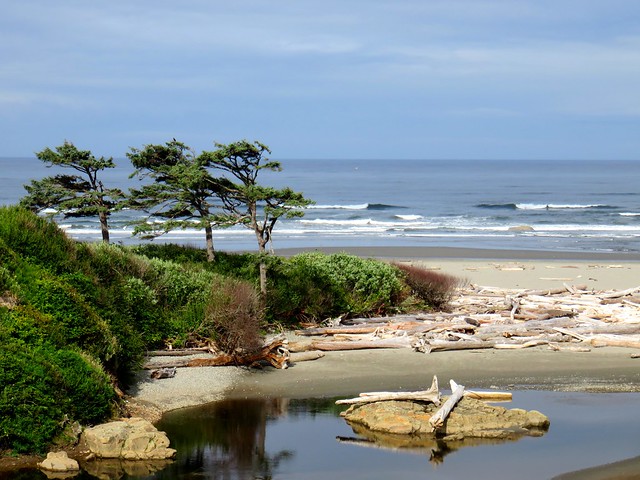 One thing we learned when we reached the lodge was how to pronounce the name: CLAY-lock. The Quinault native Americans named the area, which translates to “good place to land” as it was a safe place to land between the Quinault and Hoh Rivers.

Another thing we learned is that the fanciest rooms can have their shortcomings. The room was indeed very large with a great view. I loved gazing out at three windblown cedars near the Pacific. The room had its own wrap-around balcony and dedicated interior and exterior stairs. But the bathroom was another matter.

An elevated area that was once a stage now had a whirlpool tub, shower, sink, and cramped toilet room. The toilet room was the problem…it stank! The longer you were in there with the door shut, the more your nose itched with the unwelcome smell of old urine. Our attempts to clean the area did not help. I should have raised more of a stink about it, haha, but we just held our noses. First the smelly carpet in Astoria and now this. Thankfully that was the last issue we encountered with our honeymoon accommodations, and things would improve a lot when we arrived in Canada a couple of days later.

One thing Wendy is adamant about is having coffee to start and end her day. Travel complicates that, and here is her take on the struggle for a good cup of coffee moving from one hotel to another.

The types of coffee machines varied as we hopped from hotel to hotel on this trip. Many hotels like Best Western have the one or two cup drip machines. You get a tea-bag-like packet with coffee in it and pop it into the tray, add water, and let it drip. That’s the norm. At home I use a drip coffee maker, so that is fine by me.

At some of the hotels, they have those Keurig coffee makers. They make good coffee, a little strong, but still good. Instead of a filter or tea-bag-like packet, you get a plastic cup full of ground coffee with foil covering the top. Pop it into the Keurig (which punctures the plastic cup), and add water. Then wait. Forever.

At Kalaloch Lodge, we had a regular drip coffee maker. Relieved, I got out my filters and little sandwich bags full of the “good stuff” (½ Walmart decaf and ½ Dunkin Donuts regular). When I opened up the coffee maker to put in a filter, the filter basket was CAKED in brown coffee gunk. It appeared it had never been cleaned. So I worked with my Q-Tips to clean out every single crevice. When that was all clean, I pondered what kind of microorganisms might be growing in the water reservoir, which I could not readily get to. Completely disgusted, I decided not to use the coffee maker.

Usually I am prepared for a situation like that. Granger’s father gave me a portable coffee kit with an electric percolator and all of the accoutrements. That kit is usually my backup on every trip. Unfortunately, due to airplane weight restrictions, I wasn’t able to bring it on the honeymoon. But I couldn’t just go without my coffee!

Since I was raised to “rig” things up when they don’t work, I came up with a solution. I took a filter, filled it with coffee, and then tied it up tea-bag fashion with the tie from a trash bag. I boiled a cup of water in the microwave and then dipped the bag into the boiling water. Voilà! Coffee time!

Later, once we got to Canada, I would discover yet another coffee making device – Nespresso. It’s pretty fancy and high-tech.  Coffee delivery systems are evolving, but just give me a drip coffee maker any day. Keep it simple.

The room certainly had its shortcomings on cleanliness, but the lodge’s Creekside Restaurant was splendid. We ate there for all of our meals. It had an attractive seating area indoors (we avoided the patio, although it looked pleasant), and the food was great. All of our servers were interesting, helpful, and friendly.

The whole point of our stay at Kalaloch, however, was to visit Ruby Beach. Named after the ruby-like crystals in its sand, the beach was a 7.5 mile drive north on 101 to a lot filled with cars and a trail winding its way down to the ocean. A panoramic view through the last stand of trees revealed an initial beach area covered in driftwood, with a group of sea stacks. 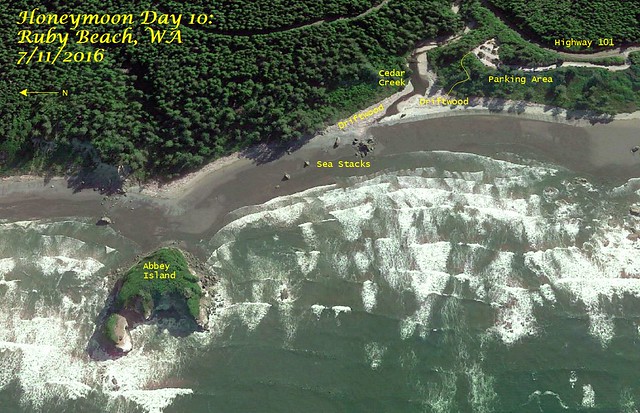 A closer look revealed people roaming amidst sea stacks three or four times their height, with Abbey Island looming in the background with its steep rocky cliffs. We would eventually roam over to it during our exploration of the beach. 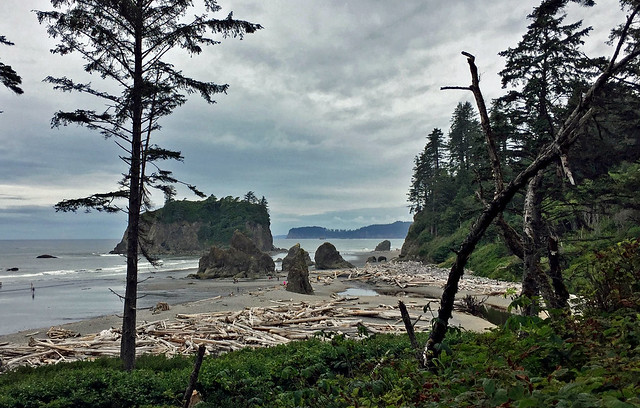 Upon reaching the shore, we had to clamber over driftwood and made our way northward toward Cedar Creek, which was flowing strongly across the rocky beach and into the ocean. I led us away from land to what seemed the easiest place to ford the creek, where we rolled up our jeans and carefully made our way across. Wendy delighted in scouring the rocky beach for finds while I headed toward a large sea stack to explore its nooks and crannies.

Some of the sea stacks were quite striking, and Wendy posed in an archway of one to provide scale. 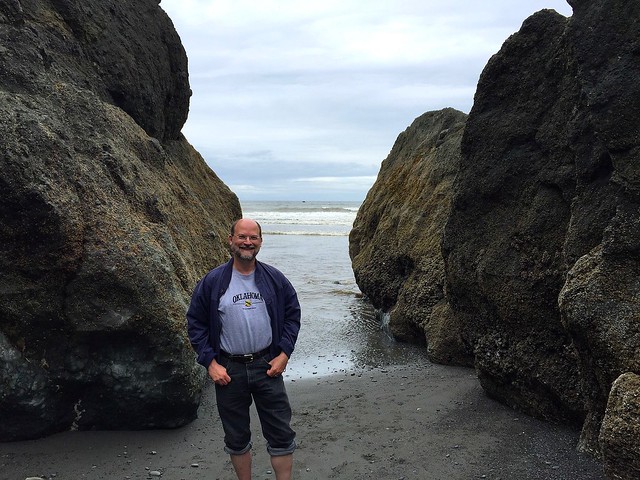 An Okie visits the Pacific shore

Finding me out in the sea stack, Wendy took a shot of me below a rock archway and in a narrow channel between walls of volcanic breccia covered in mussels embedded in barnacles. I held my thumb up to some gooseneck barnacles for scale. A dead tree leaned up against the same volcanic rock underlying the shore forest. 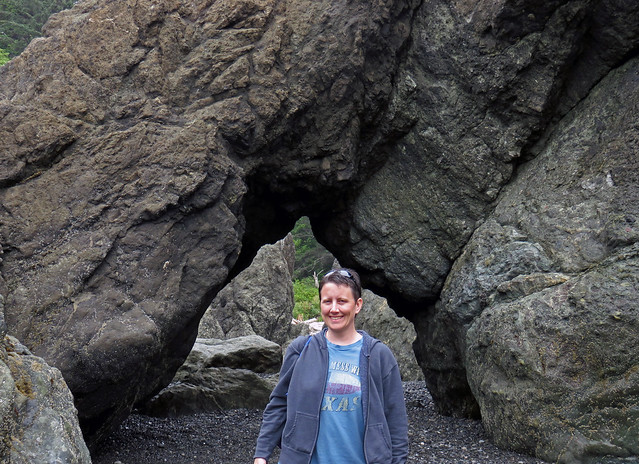 While I took photographs and shot a video through the rocks of the ocean waves, Wendy posed for me briefly before returning to scouring for agates. Hearing her speak of green stones, I collected as many as I could find in the area for her to sort through.

We left the sea stacks behind and made our way over to Abbey Island. Early settlers to the area thought that the imposing block of an island resembled a cathedral. Tidewater pools around its base had sea anemones, both submerged and rising up out of the tide. 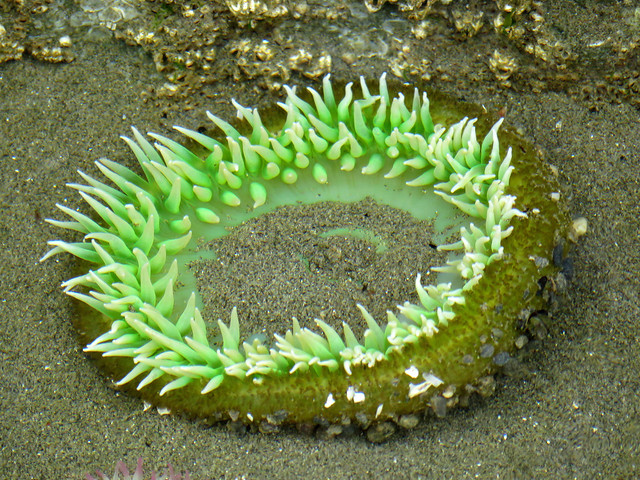 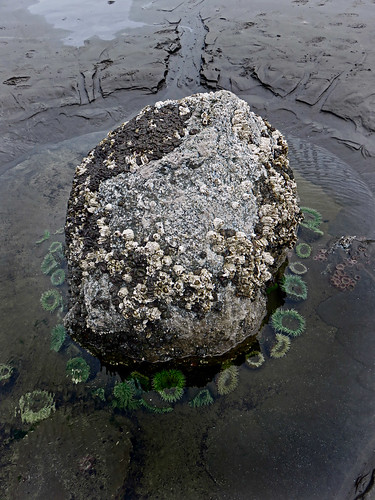 Acorn barnacles and a necklace of anemones

There were a couple of seaside organisms this boy, raised in the cross timbers in the middle of the continent, simply could not identify. I did figure out that white scales covering one rock were the calcareous bases of dead acorn barnacles. A large stone featured both acorn barnacles and a necklace of submerged anemones. 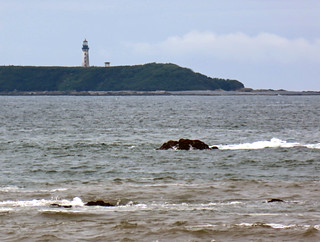 Some enterprising visitors had built different driftwood structures on the rocky beach. Destruction Island was visible four miles southwest of Ruby Beach, with its lighthouse made clearer by the superzoom camera. You might expect the name refers to shipwrecks, but I had read about how a group of Spanish sailors was massacred there in 1775 by the local Quinault Indians, lending it the name Isla de Dolores (Island of Sorrows), and twelve years later an English fur trading ship had a party leaving this island meet a similar fate on the Hoh River, leading its captain to name it the Destruction River and for that name to then attach itself to the island. The lighthouse was completed there in 1891 and automated in 1968, but is no longer in operation, and its light is now in the Westport Maritime Museum.

Last Night in the States 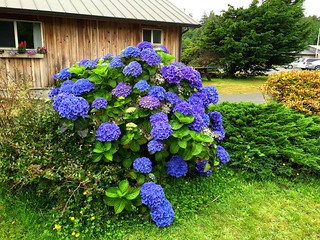 We drove back south to Kalaloch Lodge. On a walk around the property, I admired a large bush of blue and purple hydrangeas. During dinner in the lodge restaurant the sun was sparkling off the ocean outside. This would be our last night in the United States for five days. The next day we would make our way to the north shore of the Olympic Peninsula to catch a ferry to Victoria Island in British Columbia, Canada. 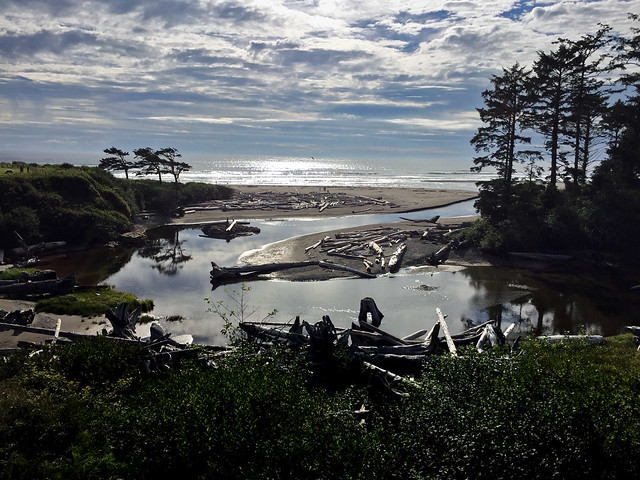 Honeymoon, Day 11: To Canada from the Port of the Angels >