A Grand Adventure, Days 1 & 2: From Cadillac Ranch to TinkerTown

Dad and his camper in 1991 on our trip out West

Over a quarter century ago my father and I went west in his Volkswagen camper, with him showing me highlights of central New Mexico, southwestern Colorado, and Arizona. In 2013 and 2014 I took Wendy to some of the sites in New Mexico and Colorado, such as the Durango-Silverton railroad, the ruins of Mesa Verde, and Sandia Crest above Albuquerque. But we never made it all the way west to Arizona, so she had never visited the incredible Grand Canyon. My friend and colleague Betty Henderson and her husband, John, had also never visited that natural wonder. That led me to formulate a plan.

In July 2017 I’d be taking up an administrative job, giving up the traditional summer break of a classroom teacher. So I proposed that the four of us travel west in June to see the Grand Canyon and other sites along the route. Betty and John drove separately so that they could head back home after a week on the road, while Wendy and I would remain in Santa Fe, New Mexico for a few extra days. On June 9, 2017 we set out on a journey of over 2,500 road miles, with the far point being the Grand Canyon, over 900 air miles from home.

Our first stop was in Oklahoma City to have lunch with my parents, who are now 80 and 92, respectively. As usual, I kept my iPhone’s FollowMee app on throughout the vacation, allowing my parents to track our progress and vicariously enjoy our trip. Then the Hendersons followed Wendy and me westward on I-40, the successor to much of the famed Route 66. Our first overnight stop would be in Amarillo.

We pulled into Amarillo for a late and disappointing dinner at the Calico County restaurant we had enjoyed so much on previous trip. Thankfully it redeemed itself with tasty breakfasts when Wendy and I came back through the cowtown twelve days later. We spent our first night at the Drury Inn & Suites, a very nice facility even if the smell created by Amarillo’s livestock wafted into the lobby from time to time.

Our second day on the road featured our first tourist attraction, the Cadillac Ranch just outside of Amarillo. As usual, visitors were milling about, spray painting the old cars and taking photographs. 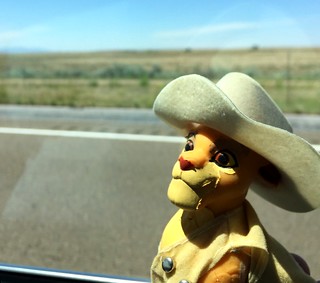 Kion went west with us

Wendy had brought a little Kion squeezable figurine with her on the trip, but it didn’t take much of my driving for her to squeeze him so much he burst, necessitating a bandage. Little Kion had stopped with us in Groom, Texas during our first day on the road, showing no fear of The Dreaded Red Tigers. While we were at Cadillac Ranch, he hopped on top of one of the wheels, which were encrusted with over 40 years of paint.

Lunch was at the venerable Joe’s Bar & Grill Cantina in Santa Rosa, a place John had visited with a railroad crew years ago. I avoided the chile sauce on my burrito, but enjoyed filling my sopaipilla with honey. 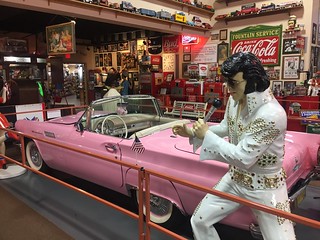 I made sure to stop every hour or so throughout our road travels to give everyone a break. So we stopped in many tourist traps, including Russell’s Travel Center in Endee, New Mexico. Elvis was there alongside a pink cadillac. There weren’t any Stuckey’s along our route, but their Pecan Log Rolls were present, for better or worse.

Clines Corners is the stop on I-40 where Wendy and I usually angle northwest to Santa Fe. Wendy used products from there to outfit Kion with a cowboy hat for Texas and a sombrero to shield him from the strong New Mexico sun.

It was warm throughout most of our vacation, with the exception of a cooler and windy first day at the Grand Canyon. Everyone’s nasal passages dried out in the desert, and Wendy and I were happy to feel the moisture of Green Country upon our return home. 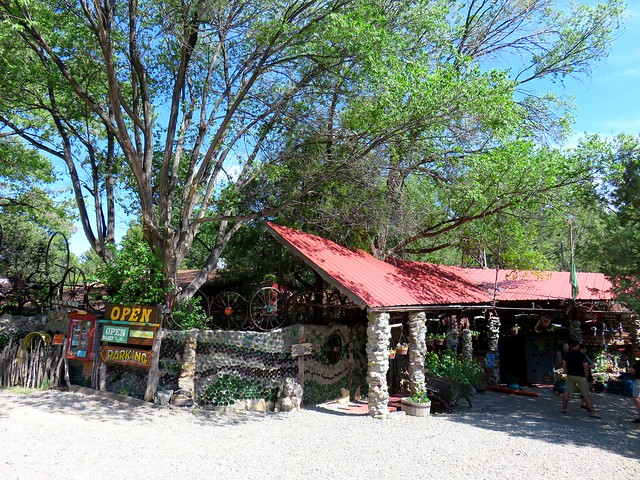 TinkerTown is on the eastern slope of the Sandias

Instead of angling up to Santa Fe at Clines Corners, we drove on west to Albuquerque. We had never been to TinkerTown on the east slope of Sandia Peak, so I led us there to explore the odd structure and admire the wacky and obsessive creations of the late Ross Ward. His motto to “Live Life as the Pursuit of Happiness” was evident in his plethora of dioramas. 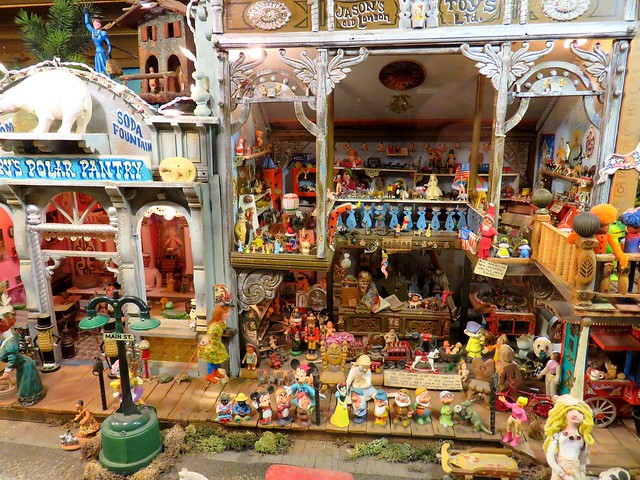 Just a bit of the many TinkerTown dioramas 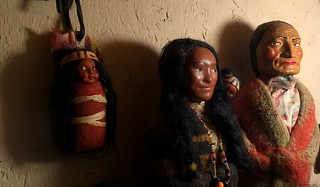 “I’m not sure what to make of this place…”

Wendy had a hoot laughing at the expressions on the faces of various figures, including various wagon drivers, politicians at a seamy hotel, bar folk, characters in an ice cream parlor, coffee drinkers, folks at a burial, a Native American family of sideways glances, the Dukes of Hazzard with a wagon rather than the General Lee race car, and general street folk.

A large circus diorama reflected how Ross Ward was a show painter for carnivals for 30 years. Wendy found one of my heroes, Alfred Hitchcock, lurking in a graveyard near TinkerTown’s animated hell, and we found a display depicting teachers on summer vacation, although I think they went to the beach rather than the desert. 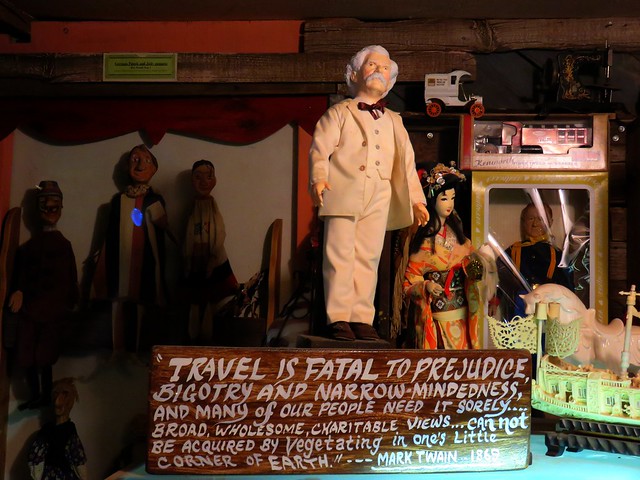 Travel is fatal to prejudice, bigotry, and narrow-mindedness, and many of our people need it sorely…broad, wholesome, charitable views…cannot be acquired by vegetating in one’s little corner of Earth.

That comes from Innocents Abroad, which is a great free read if you like travelogues.

Some walls of the ramshackle buildings were built of bottles, showing the influence of Grandma Prisbey’s Bottle Village out in California. There was even a Buddha bottle shrine. Outside, the Hendersons explored Buzzard Gulch, a collection of rusting equipment of the west. Wendy posed for me as Miss TinkerTown. 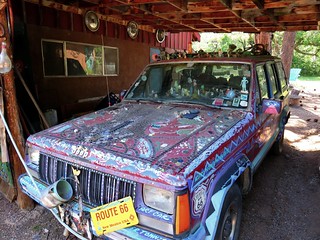 A project for a stricken man

I was touched to find that a Jeep coated in coins, paint, pebbles, and figurines was a project his wife suggested to Ross after his Alzheimer’s symptoms made it unsafe for him to drive. He had been diagnosed with the disease in his late 50s and died in his early 60s. His daughter, Tanya Ward Goodman, wrote a well-received book about his dilemma.

Up to Sandia Crest

Three years back, Wendy and I rode the tram to Sandia Crest, and we still laugh about how the guide pronounced “mountain” as “mou-ann” during our ride. This time the Hendersons joined us in scaling the peak in our respective Toyota Camrys on a long series of switchbacks up the Sandia Crest Scenic Highway.

The many switchbacks of the road to Sandia Crest 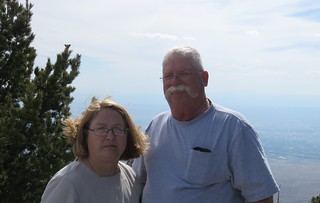 We could not ask for better travelling buddies than these two

Betty and John posed for me up top, with Albuquerque fading into the haze below us and the mountain ridge sloping off to the side.

The altitude at Sandia Crest and New Mexican food at Santa Rosa took their toll on Wendy and me, with us crashing at the hotel near Albuquerque’s Old Town while the Hendersons enjoyed dinner at the St. Clair Bistro.

The next day would bring another long drive west on I-40 from Albuquerque through the north end of the Petrified Forest to Tusayan, just south of the Grand Canyon.