Santa Fe Plaza with the Hendersons

Day 8 of our Grand Adventure was our final day with the Hendersons, who would be heading back homeward. 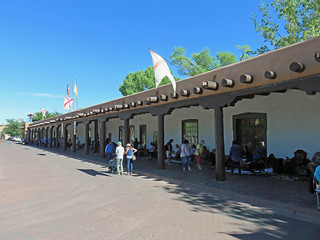 Palace of the Governors

Wendy was tired and slept in while I took Betty and John to Tia Sophia’s near the historic plaza for breakfast. Then we walked over to the plaza so that they could peruse the wares on offer by the Native American vendors along the veranda of the Palace of the Governors. On their first pass they did not purchase anything, but later returned for John to purchase a lovely bracelet for Betty.

We walked around the plaza area, seeing the public rooms of the historic La Fonda hotel. Santa Fe bought the property in 1925 and leased it to the Harvey company. For a major expansion, Mary Colter did the interior design and decorating. La Fonda is still operating today and was the most successful of all of the Harvey hotels.

Betty, John, and I also peeked into the Cathedral, being careful not to interrupt a funeral that was underway, and walked through Cathedral Park, which featured a series of large full-scale reproduction canvases of paintings by Goya. The originals are housed in The Prado in Madrid. My favorite art critic, the late Robert Hughes, adored Goya’s work, which I find challenging to love.

All too soon it was time for the Hendersons to head home. Wendy and I stayed at the Hotel Santa Fe, which was adjacent to the Santa Fe Motel & Inn where we have previously stayed in their casitas. The next time we are in Santa Fe we will likely return to Casita 22 at the Santa Fe Motel & Inn, enjoying its privacy and little patio. Downsides to our latest lodging included taking the elevator up and down to the third floor, the lack of an in-room coffee maker for Wendy, an annoying locking mini-bar/fridge, and outrageously priced breakfast options. But the facility was clean and nice, and couldn’t help that each night some idiot on a very loud motorcycle kept zooming along the downtown streets, disturbing the peace.

One day during our stay in Santa Fe, Wendy and I visited the Museum of International Folk Art, gaining free admission via the NARM badge on our Woolaroc museum pass; we are both members of that fine institution near Bartlesville.

We skipped the Girard Wing, which we’d toured back in 2014. We focused on a tramp art exhibition displaying art formed from small pieces of wood, often discarded cigar boxes and shipping crates, whittled into layers of geometric shapes having the outside edges of each layer notch carved. This art form was popular from the 1870s to the 1940s.

They had wooden and metal wall pieces, intricately whittled chains and more, works of shells and peach seeds with little rhinestones, and various larger pieces of furniture. I was impressed by Charles Steijen’s crown of thorns frame with photographs of actresses from the London stage, carved in Rhode Island in the 1890s. 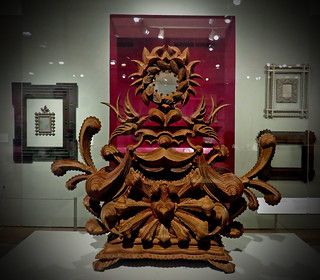 I watched parts of an interview with Freeland Tanner, who carved the intricate Celebration and Sabrina’s Gift in 2006.

Another temporary exhibit had flamenco costumes. Wendy and I had enjoyed the shows in Santa Fe by Entreflamenco in 2014 and 2015, so we recognized photos of Antonio Granjero and Estefania Ramirez. But what caught my eye was the energetic painting Vicente Romera at El Farol by Roland van Loon and the brooding photo on the cover of the old record album Antonio and his Spanish Dancers. Was it a young Antonio Banderas? Nope, it was Antonio Ruiz Soler, half of a dance duo which gained fame from 1928 to 1953.

Outside on Milner Plaza we revisited the Doris and Arnold Roland Sculpture Garden. Wendy liked Acceptance by Retha Walden Gambaro, who sculpted it as a self-portrait when she was 80. A year later, she sculpted Courage. Gambaro said she considered the “daily observation of spirituality in art forms” during her childhood in Arizona and Oklahoma to be her greatest education. She was born in 1917, with the doctor arriving by horseback, in a one-room cabin in Oklahoma, where Creek Indians had been “resettled” from the southeastern United States in the late 19th century. Her father eventually settled in Phoenix.

Standing Strong, with my Feet Rooted to Mother Earth by Kathy Whitman-Elk Woman

Wendy also photographed Standing Strong, with my Feet Rooted to Mother Earth by Kathy Whitman-Elk Woman. Whitman said of the materials in that work, “I used steel, stone and recycled materials.  I chose these because they represent us as Native women. The steel is tough, strong, resilient; the stone consists of all living beings from Mother Earth; and, the recycled materials are about resourcefulness and taking care of Mother Earth.”

Wendy put me on to a shot of Craig Dan Goseyun’s immense Apache Mountain Spirit Dancer sculpture, which dominates the plaza and is a favorite sculpture of mine. The dancer seemed to be looking out toward the moon visible in the clear blue sky. 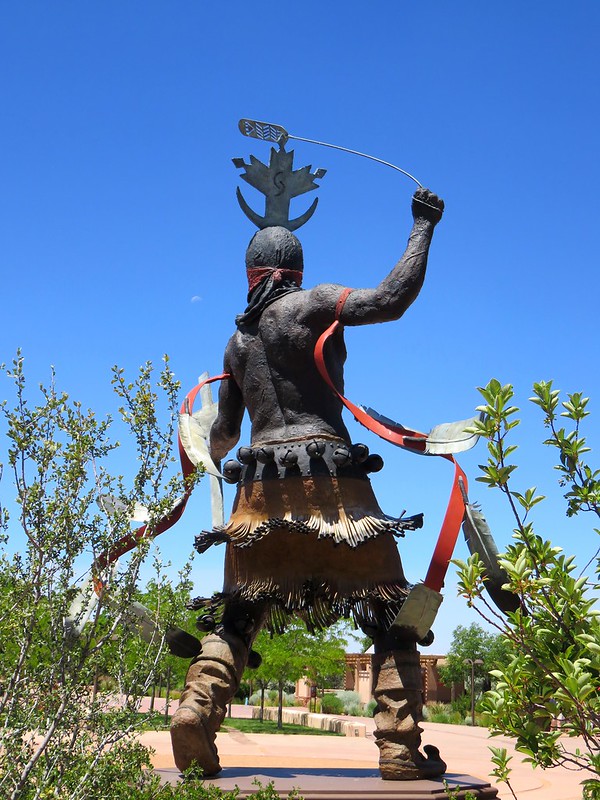 During our stay we drove east up into the Sangre de Cristo mountains above Santa Fe for a hike. We’d hiked on the Aspen Vista trail back in 2015, and on the way to the trailhead had passed Hyde Memorial State Park. So I examined its online trail map and decided we might try a short trek up to a waterfall and back.

The weather was fairly warm in Santa Fe during our stay, and Wendy was leery of hiking in the heat. I figured it would be cooler up in the mountains, but it turned out it wasn’t that much cooler. Our hotel was about 7,200 feet above sea level, and our hike began at 8,386 feet and climbed fairly steadily to 8,880 feet.

Hyde Park was New Mexico’s first state park. It was named for Benjamin Talbot Babbitt Hyde, whose family donated 350 acres to the state for the park in 1934. He was the grandson of the Babbitt of Babbitt’s soap. He and his brother financed Richard Wetherill‘s excavation of Pueblo Bonito. The park has a picnic area, campground, skating pond, and sledding area. The latter two features were not functional in the summer heat, for some reason.

There were already several cars at the Hyde Park Lodge trailhead when we pulled in at 9:15 a.m. after a breakfast downtown at Tia Sophia’s. Most of the hikers headed for the West Circle Trail, which is more difficult, gaining 1,000 feet of elevation over the course of a mile. Our hike would only gain about 500 feet, but up at that altitude, that was enough for us Bartians; we live around 700 feet above sea level. 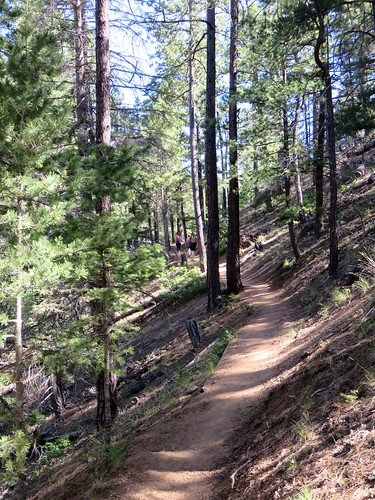 That trail climbed more steeply and was quite rocky in places as it wound its way up the mountain along a small mountain stream. We passed a rocky extrusion of pink granite, which allowed the sky to open up a bit amidst the forest. Insects swarmed around the water in the trail here and there.

We finally reached the waterfall, which was a thin flow down a rocky bluff. 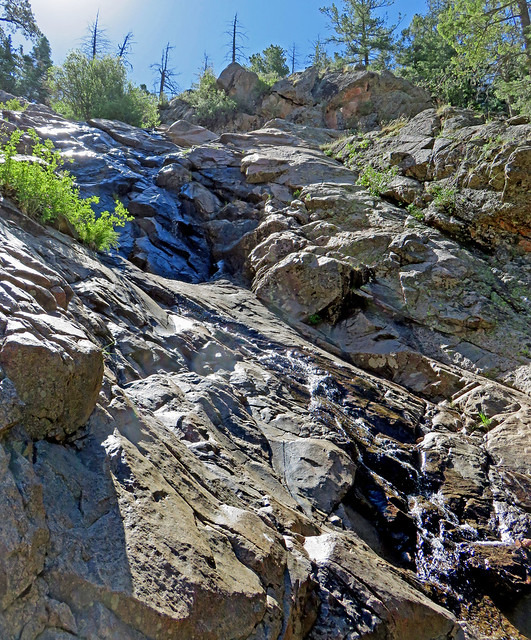 Both of us were tired and hot and ready to turn back. We retraced our steps, now heading almost always downhill. When we made a pit stop at a toilet below the trail fork, I noticed flowers growing along the banked terraces and was glad to see bees buzzing about them. I’d imagine that on this hike Wendy found a few rocks to add to her collection in our hotel room. 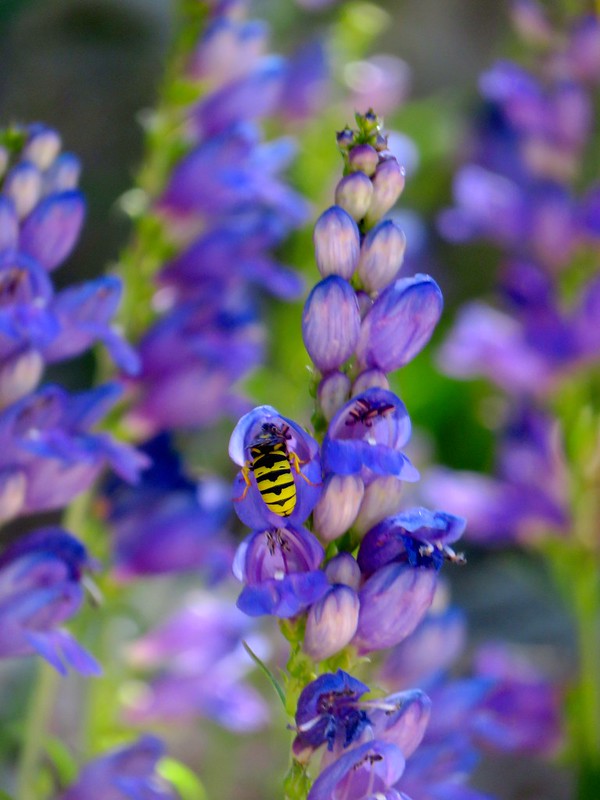 So we managed to get a few short hikes in our vacation despite the heat. I’m eagerly looking forward to autumn, hoping that my new job will allow me to devote more time to hiking on the weekends when my favorite season arrives.

After five nights in Santa Fe, we headed back along I-40 to home. Back in Amarillo, we made our usual stop for burgers at Blue Sky before spending the night. The next morning, we gave Calico County another try. Thankfully our breakfast there was much better than the dinner we’d endured earlier in the trip.

This time we did not stop in Groom, Texas for a break from driving, but I was glad to see the silly leaning water tower near there featured in a tile mosaic at a Texas rest stop. 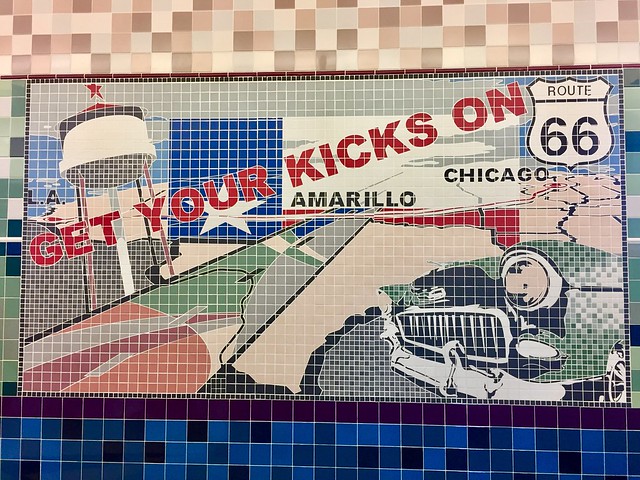 We again visited my parents in Oklahoma City and spent a night in my hometown before finally returning to Bartlesville, 14 days after setting out on our adventure. I doubt we’ll take any vacations that long for years to come, given my new administrative calendar. But we hope to take some shorter trips, both on our own and with the Hendersons, in the future. Life was meant for good friends and great adventures!

Collection of all photos from this summer vacation