Our Independence Day was spent in Santa Fe, filling our senses with sights, sounds, and tastes. 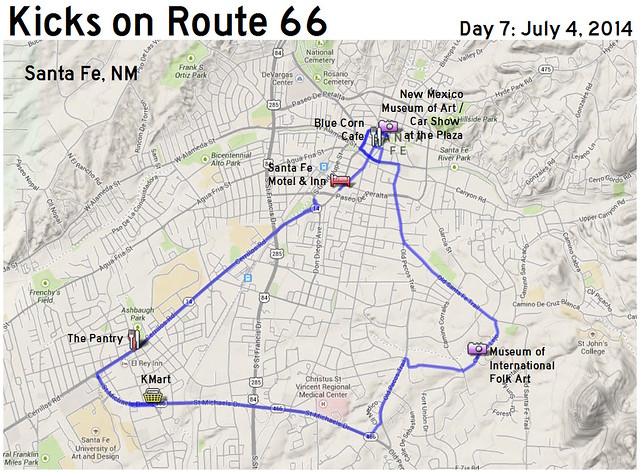 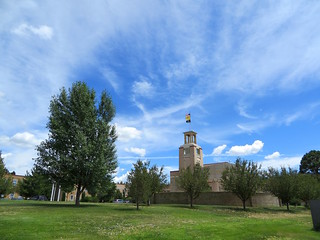 Skies above the former capitol

Lunch at the Blue Corn Cafe

We began with a walk up Cerrillos Road and Galisteo Street past the former state capitol, which was capped by a beautiful sky. Lunch was at the Blue Corn Cafe near the plaza, ascending a lovely flight of stairs to the architecturally interesting cafe up on the second floor. I had yummy blue corn tacos while Wendy enjoyed a honey chipotle chicken sandwich.

Car Show at the Plaza

We then ventured over to the plaza, where the annual pancake breakfast was wrapping up, but the Santa Fe Vintage Car Club was having a show, with cars lined up on both sides of Lincoln Avenue. A couple of muscle cars had skeletons in the driver seats, making for skeletal muscle cars (a joke for anatomy teachers). I took a shot of a classic Mustang convertible. I snapped an old Austin Healey sports car, since my father owned one when I was very young. In the plaza there was music with street performers and art booths; I especially liked the intarsia or wood inlay pictures by Adrian Martinez.

Last year our stay in Santa Fe was too brief to take Wendy through the small yet wonderful New Mexico Museum of Art. I made sure we visited that, as I love its architecture. It is a Pueblo Revival building, and it influenced the eventual Historical Zoning Ordinance, which mandated the use of the Pueblo style or Territorial Revival style on all new buildings in central Santa Fe. We relaxed in the courtyard, which is my favorite spot in Santa Fe, before viewing the galleries. Many of the paintings reminded Wendy of the style of El Greco and Van Gogh. 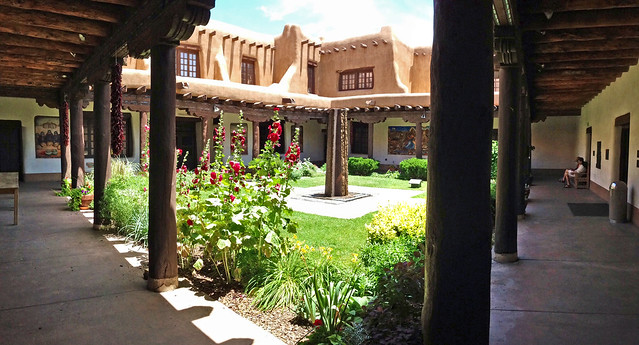 Courtyard of the New Mexico Museum of Art 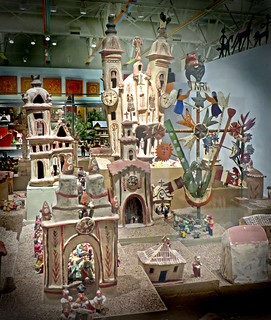 We then walked back to our hotel, passing a fun wall mural along the way. Princess the Camry transported us up Museum Hill to the Museum of International Folk Art. I was lucky enough to see it in 2010 during the annual International Folk Art Market, and knew that Wendy would be fascinated by the intricate pieces in the museum’s Girard collection, which I saw in 2011.

We were greeted at the entrance by an American Indian with a beautifully resonant voice; he clearly was radio-trained. The Girard collection was our first stop, with us picking up the requisite guide book at the entry to identify the pieces on display (yes, I failed to look up that pictured piece). Wendy was prowling for beadwork to photograph and share with my mother, who makes lovely bookmarks with tiny number 11 beads. Wendy found an airy floral grave ornament made for a child’s grave in the Père Lachaise Cemetery in Paris, with strands of beads wound around a latticework. She also located a group of beadwork dolls, of various sizes, from New Mexico and Arizona in our country as well as from Africa’s Cameroon, Zambia, Zimbabwe, South Africa, Swaziland, and Ghana.

We saw a Peruvian Village display I recalled from my previous visit, and a large Tree of Life from Mexico. I also remembered the impressive Polish szopkas from Krakow, covered in bright foil and used as a miniature puppet theater at Christmas. A large and cleverly arranged display of angels and devils represented the Christian Heaven and Hell. We also admired an extensive harbor scene with villages from Mexico, Italy, and the Orient. 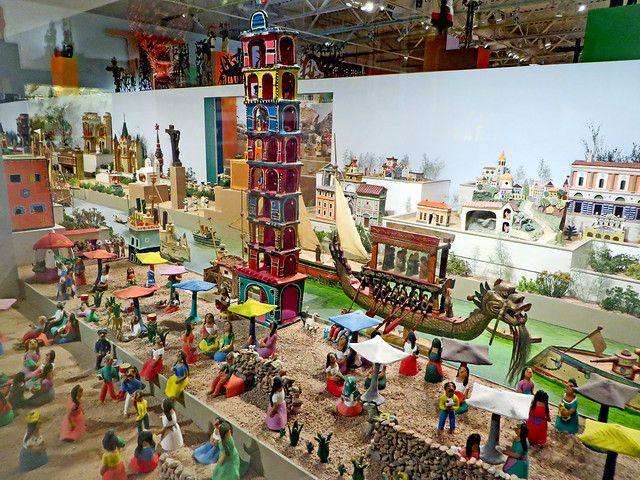 I plopped down on a bench to rest my back. As I gazed across the displays opposite me, I had to laugh at the one which caught my eye, a sexy piece of urban African art which Alexander Girard found on the island of Gorée, near Dakar, Senegal. I liked the title he gave it, Once Upon a Time There Were Two Twin Sisters. Make up your own story from there! 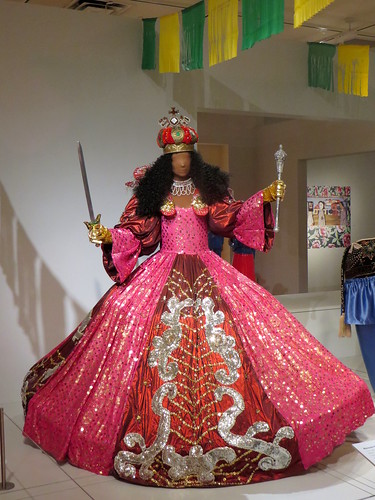 We then toured a temporary exhibit of costumes from Brazil. The story behind the Porto Rico Maracatu Nation Queen costume was a bit chilling; the carnival clubs in Recife, Pernambuco trace back to the early 1800s when plantation owners organized their African slaves into “nations” by tribal origins. As part of the Christmas season entertainment, these groups performed dance pageants for the plantation, dressed as members of the Portuguese royal court and dancing to African drumming in polyrhythms called maracatus. That’s a dark history behind a lively and beautiful custom.

There was also an African lancer, called caboclos de lança, representing warriors possessed by Amerindian or African spirits. The performers dance, drop to the ground, and sometimes duel with each other while wearing large cowbells on their backs. A carnival bear costume was another matter entirely, tracing back to Italian gypsies who arrived in northeastern Brazil to work in the sugar mills. Some brought with them trained bears who performed in small traveling circuses, but the bears did not last long in the tropical climate, prompting people to create costumes for dancing bears along with Italian trainers and a hunter. Another exhibit had a variety of colorful Japanese kites. 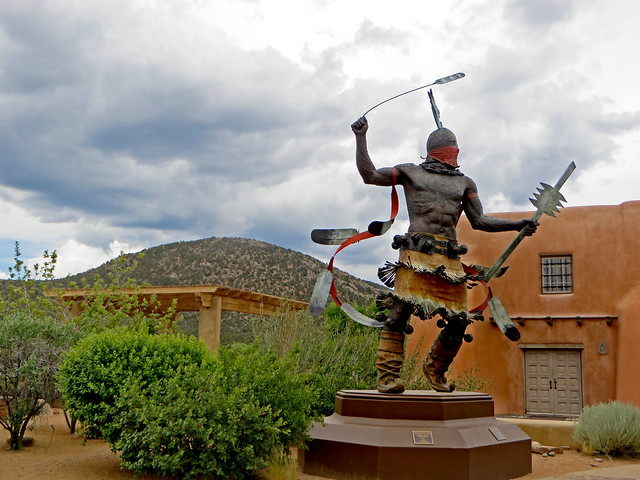 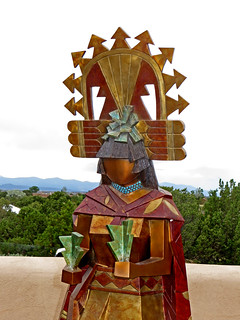 Back outside on Milner Plaza, with gorgeous clouds overhead, were large tents being erected for the International Folk Art Market. Each was adorned on the underside with a different style of hanging decorations. Craig Dan Goseyun’s Apache Mountain Spirit Dancer remains the dominant sculpture on the plaza, dwarfing me when I posed beside and in front of it. But nearby in the Doris and Arnold Roland Sculpture Garden was a kachina figure with interesting blocky, planar cuts and a beautiful robe and headdress.

We stopped at a K-Mart for supplies and had dinner at The Pantry, the decades-old establishment where I had breakfast back in 2011. We both indulged in turkey, with me having an open faced turkey dinner and Wendy eating a turkey sandwich. 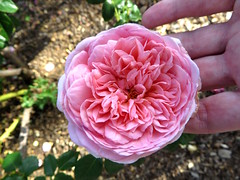 As we drove back to our casita, Wendy the rose enthusiast spotted a rose garden in the Railyard Park. We had to stop, of course, and she scampered about, admiring and identifying the bushes. There were red blooms, pink and yellow ones, tight pink clusters, and some pink and yellow blooms with oodles of petals. She was in heaven and said she could spend a happy day tending the bushes.

But we had a big adventure coming up: a challenging hike at Ghost Ranch and an evening with a close-up view of incredible flamenco dancing. Our Kicks on 66 trip would reach its climax on Day 8.