Day 6 of our Kicks on 66 vacation was spent away from any of the various routes of the Mother Road, to the northwest of Santa Fe along the El Rio de los Frijoles in Bandelier National Monument and nearby overlooks of the Rio Grande. 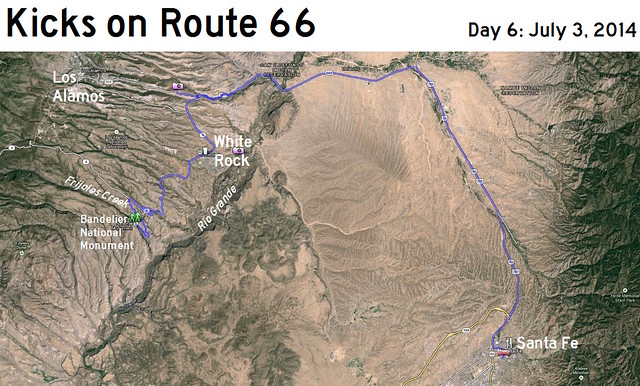 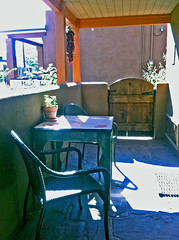 We had breakfast at the Santa Fe Motel and Inn, where we were staying. They have traditional rooms but also reworked three historic district adobe houses into casitas. Those feature thick adobe walls, several with private fenced or walled patios, heavy hand-hewn vigas adorning the ceilings, and traditional terracotta tile floors. Our casita was part of the Salazar House, and during our stay we enjoyed sitting out on the front patio, relishing the cool air. Santa Fe’s elevation means it is often much cooler than most of New Mexico, as shown on temperature maps.

Many people grasp that the Rockies in Colorado will be cooler in the summer, but don’t realize that the Sangre de Cristo mountains extend south into New Mexico, so Santa Fe’s elevation is 7,200 feet, and average highs in June and July are only in the mid-80s Fahrenheit, with average lows in the low to mid 50s. The air is dry despite the July and August monsoon rain; during our stay there were small showers almost every evening, but the humidity never felt high. Back home in Oklahoma, Bartlesville at 700 feet would typically have highs in the upper 90s, lows in the mid-to-high 60s, and much more humidity. So Santa Fe is a relief, albeit not as cool as other places I have fled to in summer such as Gunnison, Colorado or the Pacific Northwest.

We got up earlier than is our norm for vacations so that we could hike at Bandelier National Monument in the morning; it was about a 40 minute drive to White Rock. There we would have to wait for one of the shuttle buses which in the summer transports visitors to and from the monument every half hour. The parking at the monument has been limited since the Los Conchas fire wiped out the bridges over the Frijoles Creek three years ago.

I am dirty, ragged, and sunburnt, but of best cheer. My life’s work has at last begun.

The monument is named after self-taught anthropologist Adolph F.A. Bandelier (hence the spelling variation from the bandolier ammunition strap). He came to New Mexico in 1880 and lived and worked among different American Indian groups, visiting 166 archaeological sites in the area in his first 18 months. In 1880 men from Cochiti Pueblo guided him to their ancestral homes in Frijoles Canyon. He made it the setting of his novel The Delight Makers, which depicted pueblo life in pre-Spanish times. He left New Mexico in 1892 for studies in South America.

Dr. Edgar Lee Hewett, a prominent southwestern archaeologist, directed several expeditions in Frijoles Canyon in the early 1900s and was instrumental in having the monument established in 1916. He is the man who persuaded Maria Martinez to pursue creating black-on-black pottery.

Evelyn Frey and her infant son came to Bandelier in 1925

In 1907 a private lodge was built, and in 1925 George and Evelyn Frey took it over. There were no roads into the canyon until the 1930s; the early lodge was reached by mules. In the 1930s the CCC built a road along with trails, a visitor center, and a new lodge. The Freys divorced, but Evelyn Frey remained at Bandelier and ran the new lodge until it closed in 1976; she lived on at Bandelier until her death in 1988.

Three years ago I first visited the monument. In the wake of the Los Conchas fire, the trails in Frijoles Canyon were closed. I was, however, able to hike the Tyuonyi Overlook Trail to get a glimpse of the ruins I would see close-up this time around. I also walked the ruins at the separate Tsankawi area. Looking back, I actually liked those trails, with their tremendous vistas, more than the main loop Wendy and I took on this trip.

Features along the main loop trail

But the 1.5 mile hike we took on the re-opened main loop did allow us to see Tyuonyi close up and visit cliff houses stretched along the north side of Frijoles canyon. The shuttle bus was nearly full, and when we finally arrived at the visitor center we paid a few bucks to keep a guide book about the trail and were careful to visit the only working restroom facilities in the canyon before setting out.

The north face of Frijoles Canyon was riddled with small caves and pockets. In the bottom center of that view, we could see hikers climbing a ladder into one of them above us; I used my superzoom camera to see what was going on.

Wendy and I passed a large kiva, one of the partially subterranean round rooms which originally had a wood and earth roof with rooftop ladder entry. Some were decorated inside with images, and rectangular holes in the floor may have been foot drums or used for storage or for sprouting seedlings. This large kiva was separate from three regular-sized ones we would see later on in the ruins of Tyuonyi. 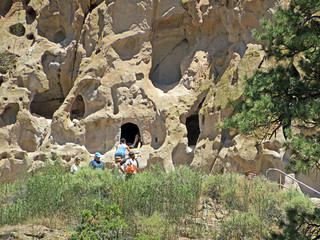 The trail leads right through those ruins, concentric rings of small rooms around a central court which housed about 100 people amidst 400 rooms on a few levels. Construction of it began over 600 years ago. You get a better sense of the place from up on the cliffs, which were occupied contemporaneously. Up there the Indians carved rooms out of the volcanic tuff, often building a stone room in front. You can spot the holes for wooden supports.

The tuff is ash flow from the eruption of the Valles Caldera volcano 1.5 million years ago. It toughens as it weathers, and the consequent hard outside and soft inside made it ideal for cliff dwellings. The tiny cave rooms usually have a blackened ceiling to help toughen the tuff.

The last phase of Indian settlement here was the construction of Tyuonyi and adjacent cliff dwellings. The Indians began to practice agriculture around 1200 CE with fields of corn, squash, and beans grown mostly up on the mesas but also down in the canyon. They left this area in the late 1400s, moving on to pueblos along the Rio Grande, some of which are still occupied. 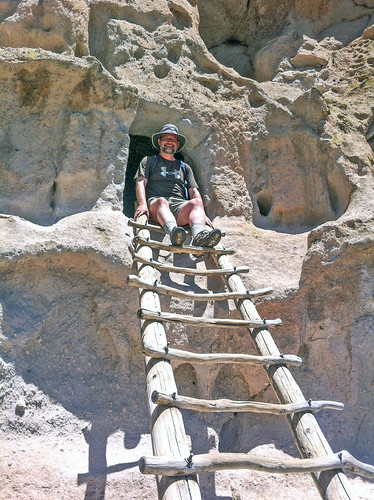 Climbing up for a look

More cliff dwellings were ahead, constructed at the base of a prominent cliff. We were coming to Long House, where the Indians built dwellings against the rock face so that they could be several stories tall. The trail led beside this 800-foot stretch of adjoining multi-storied stone homes and hand-carved caves for back rooms.

Below us we could see flood damage from Frijoles Creek, which now roars with mud from the monument lands since 75% of the canyon burned in the 2011 Las Conchas fire. Fire is nothing new to the area, with fires in 1977 and 1996 together burning 40% of the park.

Above the top row of roof holes are petroglyphs, and a pictograph was found covered in plaster on the back wall of a second-story room. 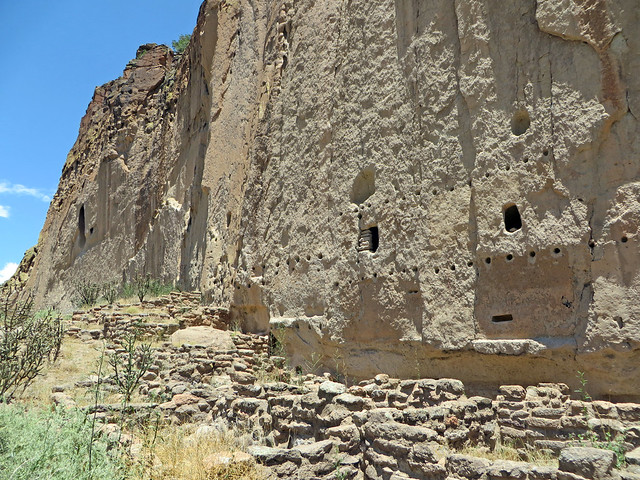 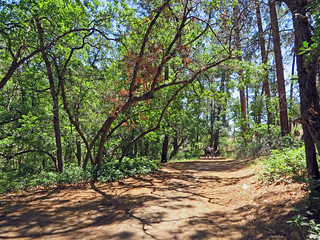 We left the ruins behind and crossed Frijoles creek on a makeshift bridge. I turned back for a look at the cliffs before we hit the beautiful, and thankfully cooler, creekside trail. We opted not to take the side trail to Alcove House but instead turned back toward the Visitor Center.

We saw more flood damage and caves up in the cliffs to the north. Back at the visitor center, we could see more cliff dwellings behind it. We’d enjoyed our hike, but were hot and hungry. So we boarded the next shuttle. Once it dropped us off back at White Rock, we went to The Bandelier Grill. We wanted a break from southwest food, so Wendy had lasagna, and I had a French Dip, but they had mixed green chiles into it. You can’t get all of the southwest out of the food after all.

Our next stop was Overlook Park in White Rock for a sweeping panorama of the Rio Grande as it wound its way from north to south. A nearby gully had some nice distant waterfalls, and Wendy and I posed for a selfie.

Next we wound our way to the overlook on the Senator Clinton P. Anderson scenic route to Los Alamos. You can catch a glimpse of the Rio Grande from there.

My 2001 Camry’s CHECK ENGINE light came on as we descended towards Santa Fe. A week or so earlier it came on back home and prompted a thermostat replacement. The temperature gauge wasn’t complaining, however, so we drove into town. I dropped Wendy off at our casita and drove to an Autozone to have the engine error code read. It was low flow on the exhaust gas recirculation. The car seemed to be driving fine, but I took it by the local Toyota dealer to find out how serious the problem might be. They were very kind, noting that with Independence Day and the weekend they wouldn’t be able to fix the problem for several days at best. The lead mechanic told me to just drive the old girl for the rest of the trip and on home to have her fixed there. 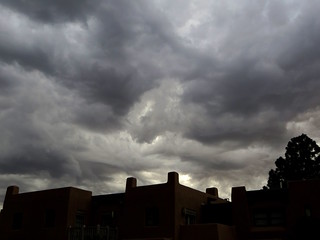 Clouds over the Santa Fe plaza

I returned to our casita, and Wendy and I relaxed before walking over to the Plaza to search for dinner. The place was eerily deserted, with tents set up for a big Independence Day pancake feast the following morning. In desperation I made the poor choice of eating at The Palace Restaurant, which turned out to be a former brothel. The menu was odd, and we decided to try several tapas appetizers, but none of them were to our liking.

We were glad to escape the red rooms of the Palace for a cool walk around the plaza. Some cookies and chocolate from the Häagen-Dazs cleansed our palates as the clouds built overhead. We returned to our casita, planning to spend Independence Day seeing a car show at the plaza and visiting area museums.