On past vacations we had driven north on US 84 from Santa Fe, NM to Pagosa Springs, CO, stopping along the way to hike at the beautiful Ghost Ranch. But by now we had hiked each of the major trails there, and I wanted to take a different route. So I opted to turn off at Española to take the High Road to Taos and then US 64 across the Rio Grande back to rejoin 84 at Los Ojos and proceed to Pagosa. 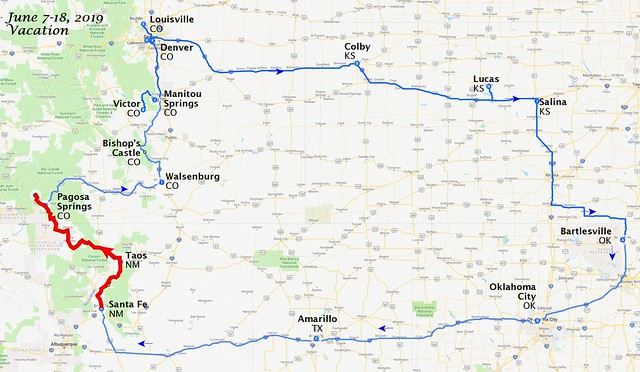 I had been through Taos 28 years earlier, never returning as I had not been impressed when my father and I drove through in a Volkswagen Westfalia Camper back in the day. But when I mention our travels to Santa Fe, people often ask if we also visit the smaller town which is likewise known for its artists. So I thought it would be worthwhile to drive through, almost three decades later, to see what I thought.

There are two primary routes from Santa Fe to Taos. The Low Road parallels the Rio Grande River for part of the journey, while the High Road I opted for is a scenic byway which takes one through a series of tiny Spanish Land Grant and Pueblo Indian villages amidst the Sangre de Christo mountains.

The winding road was a serene 40-mile-per-hour drive with few vehicles. The only drawback was a lack of roadside restrooms, which resulted in a crowd at a pit toilet facility in the forest. We drove on to Rancho de Taos, just south of Taos proper, to find relief.

I wasn’t in the mood to stop at the little villages, opting to cruise onward, although I did pull over at an overlook on NM 518.

Overlook on NM 518 on the High Road to Taos

After the peaceful drive to Taos, the overloaded highways 68 and 64 through it were miserable. It was lunchtime, and the downtown parking areas overflowed. The overcrowded, crawling drive through town put me in a foul mood, unwilling to fight for a parking place to find lunch and then take in the art museum at Fechin House as I’d planned. I wouldn’t call it road rage, but road resentment. 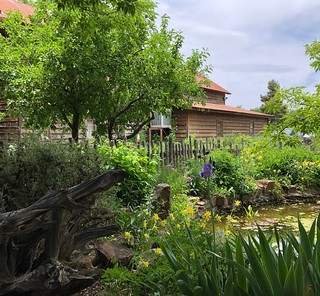 So I drove to the north end of town, where we ate at the Farmhouse Café and Bakery, a farm-to-table operation.  The setting was pleasant enough, with pretty flowers and soothing quiet. But it was also one of those annoying hippie places that refuse to serve fountain soft drinks, and our waitress did not even know to offer their fake “Dr. Becker” version of Dr. Pepper to Wendy when she ordered. While neither of us cared for our bland turkey sandwiches, we enjoyed getting a break from the road.

Then we took a thankfully lonely drive west on US 64 to cross the Rio Grande, as my father and I had done in 1991. Wendy was interested in the buried houses we saw on the west side of the river, all with one side dug into the earth and a series of windows on the opposite side to capture the sun. The Greater World Community there is the world’s largest off-the-grid subdivision.

The relaxing drive took us into the Tusas Mountains. We stopped to take in the panoramic view of the Brazos Cliffs over the Chama valley, and below you can compare the photograph I took there in June 1991 on a cheap film camera to my digital shot in June 2019. There was more snow lingering on the ground this time around, and my iPhone X captured the panoramic view quite nicely.

The remainder of the trip to Pagosa Springs was quite familiar, and we stayed once again at Pagosa Springs Inn and Suites, where Chester offered a nice new hiking map. We had dinner at Junction Restaurant and walked downtown along the raging San Juan River. I had never seen it so high and turbulent, and it was fun to stop on a pedestrian bridge and view the heavy runoff flow. No one would be tubing down the San Juan during our visit!

The next morning Wendy maintained our Pagosa Springs tradition, walking across the street to Higher Grounds Coffee Company to get us breakfast treats to enjoy on an ironing board in our room, since the hotel’s rooms lack proper tables. We then drove north up the Piedra Road 16 miles to the Piedra River, passing from asphalt road through the ever-expanding Pagosa Springs Village onto the dirt road leading toward the mountains.

They were grading the road, and I almost high-centered the minivan in trying to cross into the parking lot for my favorite trail in the area. I had to back off and park a bit down the road by the river, with us walking back up to the trailhead.

Like the San Juan down in town, the Piedra River was also flowing more strongly than it had on any of my previous visits. The water was closer to the overhanging eastern bluff than usual, and I posed for a shot. 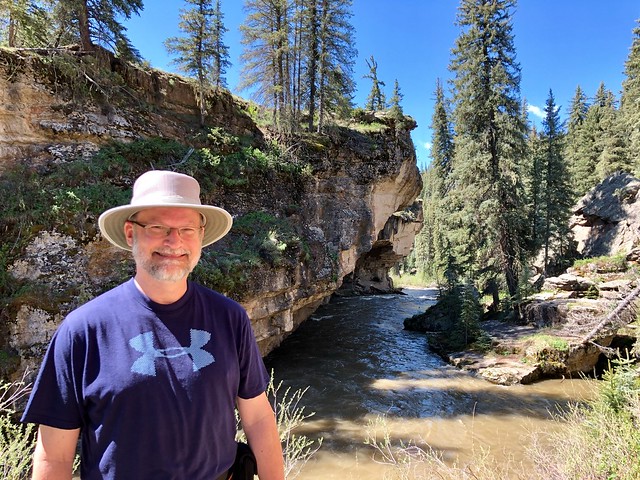 We hiked a total of three miles along the river, working our way about a mile south, as the crow flies, along the canyon carved by the river until it turned west, and then turning back. 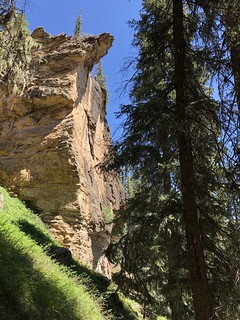 Along the way we noticed a pack in the brush below us and wondered what was going on until we spied ropes leading up to the top of the canyon. Some guys were rock climbing, and we could see a variety of pitons left behind in the bluff by previous climbers on the west side of the trail.

After returning to the minivan and driving back into town, we had a late lunch at Dorothy’s restaurant and relaxed. The next day we would head northeast to take Wolf Creek Pass across the continental divide and then descend eastward to the old coal mining town of Walsenburg to visit a rather unusual art museum.