For 12 days in June 2019, Wendy and I drove a 2,000-mile loop from Oklahoma through Texas, New Mexico, Colorado, and Kansas. We stayed overnight in 8 different towns, never staying more than two nights in a particular place. Despite having the luxury of traveling in Wendy’s comfortable mini-van, I suspect this is the fifth and final such big-loop road trip for us. We both found the pace grueling and agreed that our future vacations will be shorter overall but feature longer stays at particular locations. This last big loop featured an interesting mix of familiar and novel experiences and happy if brief meet-ups with two different sets of friends. 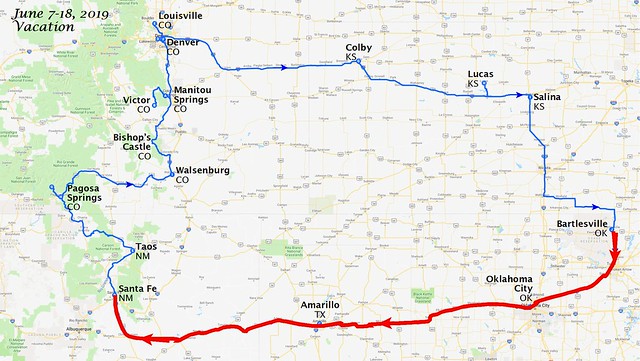 The first part of our trip followed a well-worn route for us from Bartlesville through Oklahoma City to Amarillo and onward to Santa Fe. We had previously made similar journeys in the summers of 2013, 2014, 2015, and 2017. We enjoyed lunch with my parents, which featured burgers from a Five Guys on Northwest Expressway rather than the usual Johnnie’s Charcoal Broiler. 25 years ago, Johnnie’s built a large location there, which they later reworked into a smaller restaurant. We were astonished to drive up and find a Del Taco planted in its place. However, a new Johnnie’s is being built directly to the east, so I’m sure we’ll be dining there in a few months.

Our overnight stay in Amarillo began and ended with a Friday night dinner and Saturday morning breakfast at Calico County, our favorite restaurant there. But I did want some novelty for our fifth visit to Amarillo. Wendy and I had seen the Texas Outdoor Musical in Palo Duro Canyon in 2013 and visited Sisemore’s RV Museum in 2014, Cadillac Ranch in 2014 and 2017, and the Amarillo Museum of Art in 2015. What was there left to see in this dry cowtown? You might suggest The Big Texan with its silly eat-enough-steak-and-get-it-free challenge, but a dinner there decades ago, with a friend who has since passed on, was enough for me. 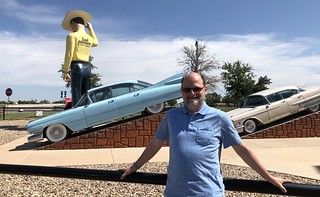 So we made a desperate stop at the 2nd Amendment Cowboy, a Muffler Man statue near some mounted finned Cadillacs, three-quarters of a mile east of Cadillac Ranch. (The Ranch itself was a muddy flooded mess when we drove past it this time.) Odd roadside statues were fresh on my mind because Bartlesville native Mary Beth Babcock recently unveiled one in Tulsa along Route 66: Buck Atom, Space Cowboy. But the wind-borne stench of a nearby feedlot led us to cut short our visit with Buck’s strangely unarmed Texas cousin.

Determined to see something else new before we left Amarillo and turned out the lights, I looped back into town. (Yes, that was a Bob Wills reference, and if you have never seen Bob and his Texas Playboys in performance, here’s a treat for you: Ida Red at the 8:10 mark in this 1951 video.)

So we found ourselves in a parking lot near a six-story high structure of four stainless steel columns, each of which is a time capsule: the Helium Centennial Time Columns Monument. In 1868, the French astronomer Jules Janssen aimed a spectroscope at the sun’s chromosphere during a total eclipse in British India. He observed a bright yellow line of wavelength 587.49 nanometers created by cascading electrons from an unknown type of atom. Scientists would name it helium based on its solar origin. Later the same element was found mixed in with natural gas from manmade wells on Earth, such as the Cliffside Gas Field of Amarillo which would become the home of the Federal Helium Reserve.

A century after the discovery of helium, a monument of four hollow columns was erected in Amarillo. Each column contained a helium-filled time capsule of artifacts, books, and documents to be opened in 1993, 2018, 2068, and 2968. In 1982 the monument was airlifted by an army helicopter to a new location in town, and its 25-year and 50-year capsules were eventually opened as scheduled. A fresh batch of items has even been encapsuled to be opened in 2093, so this odd monument, complete with helium atom dangly bits, lives on. 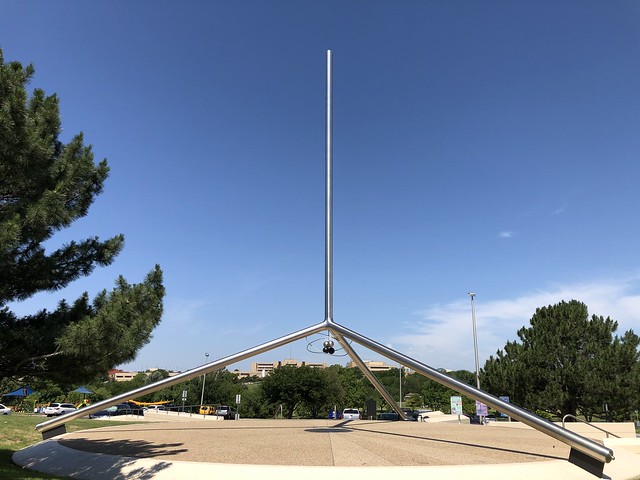 We drove onward to finally angle up to Santa Fe, where our first stop was a late lunch at Tomasita’s so Wendy could enjoy their green chile tamales. Our meal also featured the first paper straws we’d shared as a couple, reflecting increasing environmental concerns about single-use plastics.

Nearby was the Santa Fe Motel & Inn, where we had previously stayed in one-room casitas, including the one with the patio where I proposed to Wendy in 2015. This time I had rented for two nights the Casita Bonita across the street, which included a full kitchen and large patio. She loved the crushed ice dispenser in one of the side-by-side refrigerator’s doors, something we’d see again when visiting some friends in Louisville, Colorado. It was clearly a feature the next refrigerator at Meador Manor had better have. 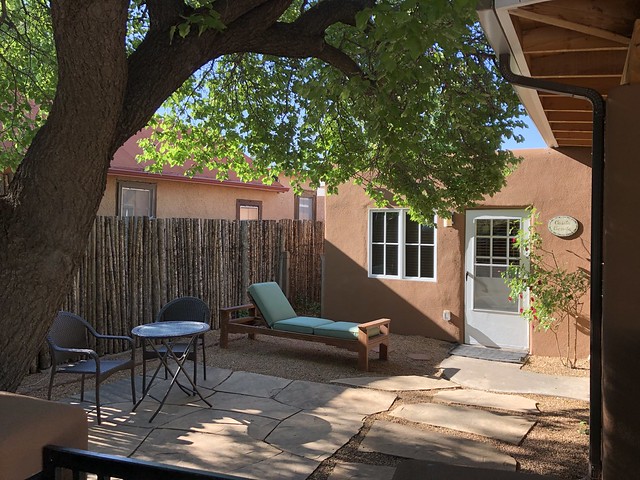 Our Casita Bonita in Santa Fe

We then walked to the rose garden in the Railyard, where Wendy admired the many different huge and quite colorful blooms.

Wendy at the Railyard Rose Garden in Santa Fe

Across the street from the rose garden is a substation with one wall adorned by a 30′ long and 15′ foot high mosaic of a jaguar and snake. In 1995 it took six months for 21 youth muralists, ages 13-19, to place the 1″ square Venetian glass tiles that form Duality and the Fifth Sun. It seemed fitting that I would see this reference to an Aztec myth about the creation and destruction of the world even as I embarked on my summer reading project: the late Gene Wolfe’s epic The Book of the New Sun. 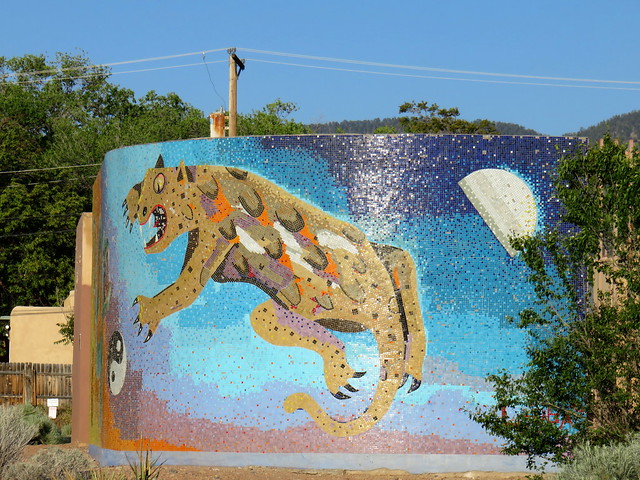 Duality and the Fifth Sun mosaic 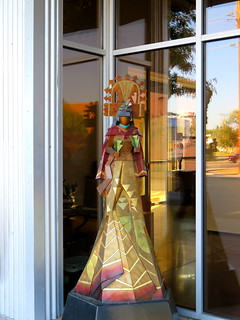 The way art can both attract and repel were evident outside the nearby Blue Rain gallery, where Martin Spei’s Hold Down of a fat, naked, and ogre-like man sitting on a gold box contrasted with Tammy Garcia’s Andrea, which I recognized as being a copy of the one in the Roland Sculpture Garden up on museum hill. I much preferred the latter, which depicts a Pueblo Indian adorned for the butterfly dance.

The next morning we walked downtown for the first of two breakfasts at Tia Sophia’s. Then we headed down Cerillos Road to a former bowling alley that has been converted into an art adventure called Meow Wolf. There is an elaborate back story to the adventure which neither of us bothered to explore, but we did note how the name of the project came from randomly drawing words from a hat.

The venue had plenty of visitors on a Sunday morning, enough that we two introverts were eventually overwhelmed. But it was intriguing with things like a glowing life-size mastodon skeleton you could whack to hear musical tones, a neon coral reef you walked, rather than swam, through, a three-dimensional line drawing room, and much more. At one point we sheltered in a balcony nook that featured rows of huge teeth along its entry walls. It was nice to be out of the flow of visitors until a child ran up to Wendy and yelled, “Whoa!” at the teeth, which likely caused both of us to bare our own at him. 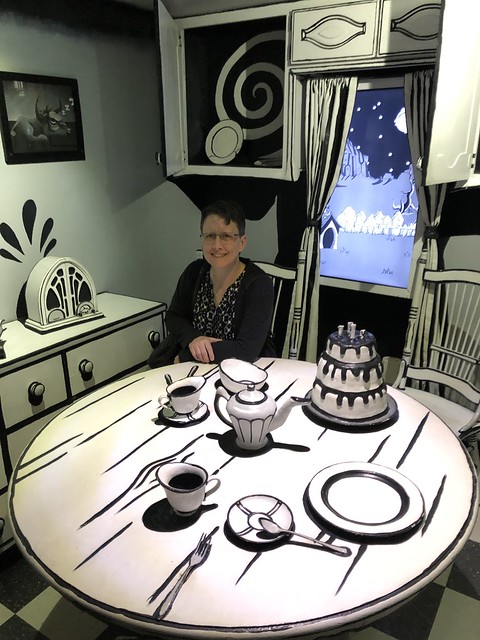 We escaped to enjoy lunch at The Plaza Southside. Then I surprised Wendy with a rose garden we had not visited previously: the Harvey Cornell Rose Park. It is a narrow sliver set aside by a neighborhood’s developers in 1957 when it was at the south edge of Santa Fe, which then had a population of about 30,000. 62 years later, the population has reached almost 85,000, and the city’s southern edge is two miles away and extends at least five miles to the southwest. 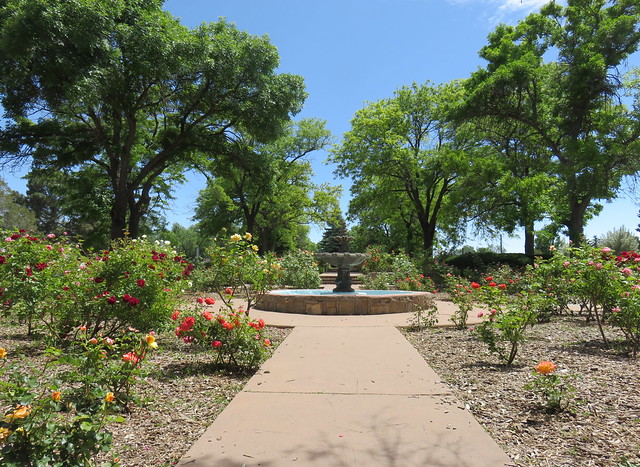 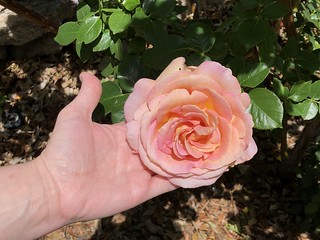 Harvey Cornell designed the garden area at the request of the newly formed rose society when he retired in the city,  and club members have kept it going ever since. It boasts about 425 roses that are large and beautiful, forming a peaceful oasis for Wendy after the crowds at Meow Wolf. Some ladybugs seemed to like it as well.

We returned to Casita Bonita, where Wendy relaxed on the patio with a robin for company. We walked to the Blue Corn Cafe for dinner, stopping by on our return walk to check on the somewhat neglected but immense rose bushes at the state capitol. Santa Fe’s wonderful food, art, architecture, and roses have made it a favorite stop for us. 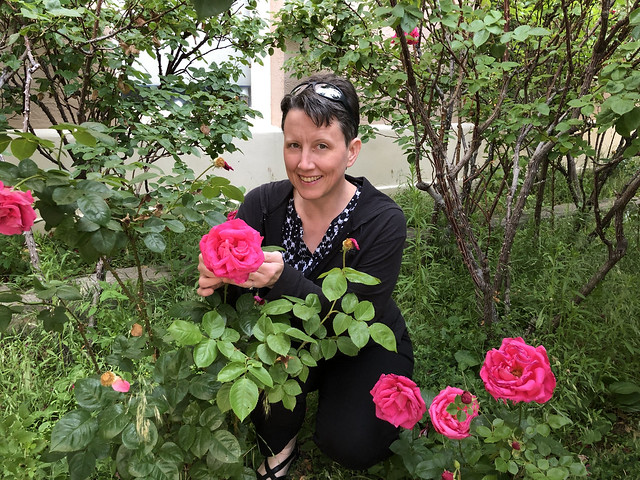 Wendy with the roses at the state capitol

Our next stop on our big loop would also be quite familiar as we returned to Pagosa Springs, Colorado. But instead of our usual route up US 84 by Ghost Ranch, we would divert to take the High Road to Taos and then US 64 back west.